Jerome was trafficked into child pornography and commercial sexual exploitation  by his mother’s boyfriend at the age of five. 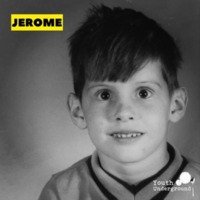 Following my parents’ divorce, at the age of five, my mother began a relationship with a man named Neale who began to molest me sexually and then use me for child pornography. I was an easy target for him, a child desperate for affection who longed for someone to come into my life and make me feel like I mattered if only for a minute. One day Neale introduced me to the peadophile ring he belonged to. My initiation into the ‘group’ as they called themselves consisted of being beaten and raped by all 10 members. The first time I was trafficked sexually, I was handcuffed to a truck stop bathroom sink and raped and sodomized for the next 6 hours by a revolving door or perverted customers consumed by the depth of depravity.

I was trafficked in plain sight as I attended school and appeared to have a ‘normal life.’ I would be pulled out of school to be trafficked, and weekends and holidays were a never-ending nightmare when my innocence was stolen ten to twelve times a day. The use of false identities complete with paperwork including birth certificates was standard practice. During ‘work hours,’ I was given a name and it was the only one that I was allowed to answer to. It was the only name we provided to clients and anyone we came in contact with, including emergency room doctors and especially law enforcement.

The people who paid to ravage my innocence were pillars of society, doctors, lawyers and elected officials both male and female. In hotel rooms, campers and private residences. I became a slave to the twisted sexual desires of anyone who was willing to pay upwards of $500 to use and exploit me as their darkest fantasies became realized. There were many times I was choked unconscious and bound, gagged and raped as clients both filmed and took pictures of themselves using my fragile body to fulfil their evil desires. My age and appearance were also altered so that no one could track or identify me and after each encounter that created a paper trail my work identity would be shredded and never used again. This process continued for the seven years I was being trafficked.