Titleeng Deng Chan was captured in 2000 and forced to walk to North Sudan, raped by four men on the way and given to her ‘master’ upon arrival. She was finally liberated in 2016 after meeting with a slave retriever. 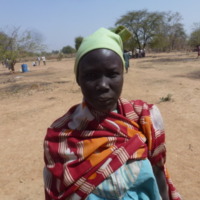 I was with my mother in my village Leuth Lual and one day my mother sent me to the pond to collect water. On my way to the pond I met with Arabs. They were on horses. They stopped me and grabbed me with my arm. I refused to move. Three Arab men got down off their horses and pushed me to move. I walked with them on foot until we arrived to another village. We met with other Arabs.

There were many Dinka people who were captured and we were put in one place and guarded by Arabs. We were forced to walk to North Sudan. I was raped by 4 Arabs men on the way to North Sudan. We walked in one line and if you walk slowly you will be beaten.

We ate left overs from Arabs and we walked 6 days before we arrived to North Sudan. I was given to Mohammed, Arab master. He has one wife, Amiena with 6 children. I used to wash clothes, cleaned the house, and collected water.

Arab children were not allowed to sit with me. I was called bad names everyday (Jiengi), Nal Abuk (Damn your father), Nal Dienke (Damn your religion), Kucumak (your mother vagina).