Alom Kuol Koor was captured in 1998 and forced to walk to north Sudan. Upon arrival he was given to her ‘master’ and forced into domestic servitude. He was finally liberated in 2016 when he escaped and met with a slave retriever in a neighbouring village. 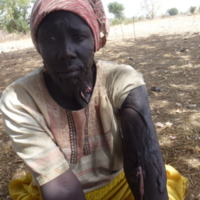 I was captured at Marialbaai when I went to collect water in the pond. Arabs came and ran away from them. They caught me and beat me with a wood because I ran. Many Dinka were captured with us and we were forced to walk to north Sudan. We walked for 10 days to north Sudan. There was no enough food and water. There Dinka men complained and asked to get more water. They were killed. Two were slaughtered and the other man was killed after his ears were cut off first by Arabs. When we arrived to north Sudan I was given to  Idris, Arab master. He has two wives and 11 children. I used to collect water, clean the house and washed clothes. One day I asked to be given a few hours to rest. Arab master’s wife got upset and poured hot water to my body. My neck burned and my arms burned very badly. I was not allowed to go to the hospital. I escaped one night and met with the slave retriever in another village. He took me to his camp and bring me back to South Sudan with other slaves. I left 3 children in north Sudan. Two girls and one boy.  I left Amina, Zanab and Omar in north Sudan. I was given to Dina slave called Hassan. He is still in north Sudan. There are many Dinka slaves in the area.