There are an estimated 12,000 people living in modern slavery in Taiwan (GSI 2018). human traffickers subject foreign men and women to forced labor and sex trafficking in Taiwan, and traffickers subject local men and women to forced labor and local women and children to sex trafficking. Taiwan women and children are subjected to domestic sex trafficking, including as part of an increasing trend in which traffickers induce and exploit Taiwan and foreign women’s and children’s drug addictions. Taiwan traffickers increasingly use the internet, smartphone apps, livestreaming, and other such online technologies to conduct recruitment activities, often targeting child victims, and to mask their identities from law enforcement. Traffickers lure women from China and Southeast Asian countries to Taiwan through fraudulent marriages and deceptive employment offers for purposes of sex trafficking. Many trafficking victims are migrant workers from Indonesia, the Philippines, Thailand, Vietnam, and, to a lesser extent, individuals from China, Cambodia, and Sri Lanka. Taiwan is host to more than 700,000 foreign workers, most of whom are hired in their home countries through recruitment agencies and brokers—including some from Taiwan—to perform low-skilled work as home caregivers and domestic workers, or in farming, manufacturing, meat processing, construction, and fishing

A-Ching travelled abroad to Taiwan for work as a cleaner. However, upon arrival she found she would be working instead at a karaoke bar and told that she owed her brokers money for taking her to Taiwan. A-Ching was sexually harassed and had her movement restricted. 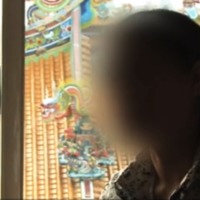 When I was young my family was very poor. I wanted to work far from home and earn money to support my family. There was a trend to go abroad to earn money, I was tempted to as well. I saw people going to Taiwan or abroad to make a lot of money, and help their families so it made me want to go.

That friend brought me to a broker in Saigon. In Saigon, the broker introduced me to another person, who brought along a fake husband for me.

When I arrived at the airport, there was a Taiwanese woman, and the fake husband who drove me to the ‘agency’. I didn’t ask them what kind of paperwork I needed to be there. I signed it and gave it to them and they did all the rest. Over here the papers were illegal but they didn’t say that. They didn’t say anything.

When they took me there, they told me that I was to work as a cleaner, but when I arrived, it wasn’t actually a cleaning job. It was a place that served guests alcohol, singing and serving guests.

When I came to Taiwan to the karaoke bar, they told me that I owed them 250 thousand Taiwan dollars. I stayed in a room upstairs. I had to stay in there even when it was closed. The door was locked and the key was kept by security.

They didn’t allow me to go outside. There were things they forced us to do. They would grope my body. They came there to have fun. They paid money so they wanted it to be worth their while. One customer might want me to undress. Another would ask for me to dance or drink alcohol with them.

I was most scared when they asked me to undress. When I got undressed, they got more dangerous and scary. If I refused they would tell my boss. My boss wouldn’t be happy. If the customer wasn’t satisfied, she would drag me outside, then she would yell and get very angry.

In the beginning she didn’t hit me, but later she did. And after that, she used an electric bludgeon. There was blood everywhere, it dripped all over my bra.

I desperately wanted to escape during those two years, but I had no way of doing so. I didn’t know anyone in Taiwan. I didn’t know who to ask for help, and I had no papers.

One day, they police came to investigate. They took me to the police station. When I got there, I found my fake husband there. I don’t know why he was there. He acted as though I was his wife. That was when I realized I was in a fake marriage.

Then a few days later, I went to the police station. I told them I was forced into a fake marriage and wanted to go home.

I am very afraid that if my neighbours found out, they would gossip. Not only would they judge me, but also my family. Mostly I am afraid they will say things that would hurt my parents. I couldn’t cope if anyone found out.

If you want to go abroad to earn money for your family, you must examine the details, because there are a lot of bad brokers.