Rachel was living in a chaotic household when she was first trafficked at 6 years old.  Rachel was forced to provide sexual services under threats of physical violence to herself and her family. She was finally able to escape her situation when she was a teenager and no longer profitable to the 'business'. 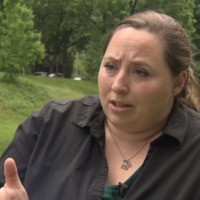 I don’t know if it’s still there or not, but, erm so you could get from the back rooms down on to the porch pretty easily, even as a little kid, knowing that it wasn’t that hard to do. So that’s, yeah, that where that all started.

He used my friend erm, you know, threats against him first of all, if you don't do what I'm telling you then I'm going to hurt him and those kinds of things. As ammunition basically to rope me in, and then started with threats against my family and other people that I knew.

At first it was just random people coming 'round to the house next door and then it was like, well I think we could probably do more or get more out of you so let's go to the house down the street or around the corner or across town. So, it was, not right away but almost right away, it was in a couple of days.

It would happen 3 or 4 times a week, mostly at night. He would come and tell me you know, this time or this, when this happens then I'm gonna need you to do this and leave the house. Or he would get my friend to tell me, you know this, after dinner, tonight pretend you're sick or something along those lines. Go to bed early and then sneak out, those kinds of things. I mean looking back on it now I think it was probably better orchestrated than even I comprehended at that point in time. And of course, back then we didn't have the language that we have today. In my frame of reference growing up I understood that to be me being a prostitute. We didn't have the same kind of language we have today, and there was a lot more that I felt I was responsible for at that point and so again given all of the other surrounding situations, somebody says, after everybody else goes to bed you're gonna come and meet me here, that's what you're going to do.

It didn't take long, probably a few months before somebody else kind of took that role over. He was still involved for a little bit but at some point he kind of fades out off the face of the radar basically. And then it was just different people to be honest that today it would be this guy, then a couple of days later it would be another guy. But you always knew who was in charge and who was going to follow through on whatever threats that they made.

Looking back there's so much that I really don't know because, for one I was so young. But I would think that there is a certain amount of that that had to be an organized kind of situation. Maybe a group of some kind. I wasn't the only one.

I don't think you can process this going on in your life. I don't know that I necessarily processed anything beyond surviving from today to tomorrow. Or figuring out how to keep my mouth shut so I didn't actually say they wrong thing to the wrong person. I don't think that at that age, given the circumstances and the kinds of things that were happening and the kind of things that I was doing. I don't think you can process beyond pure survival, that gut instinct to okay I'm just gonna do what I have to do until it's over and then move on.

Cocaine mostly, and alcohol. Not 'a lot' in today's terms but enough to take the edge off and to keep me up and to keep me compliant. People are really good at not leaving marks, you know, super obvious marks. So, a lot of my bruises and things like that were in places that you wouldn't see unless you were bathing or something along those lines. But definitely there were bones that I didn't know could hurt and muscles and things like that that I didn't even know a person had.

For my dad actually, when I finally came clean to them about what happened, this was actually years after the fact. But one of his big keys that he just recognized later is that I stopped talking. Erm I was a very jibbery jabbery child, not that I'm sure that's hard to imagine. Erm but [laughter] but I just stopped talking at one point, about the time I was six, almost seven, and he said that makes so much sense now. But then he didn't know what that was about and really had no way to kind of investigate that more. And I had a couple of doctors like...wonder what's going on with you. But there wasn't really any consistent like, no I'm seeing all this physical trauma, what's going on with you? A lot of the things that I would actually go and see the doctor for were easily explained by being around a bunch of kids, you know, pushed down the hill sometimes, skiing down this hill back behind us down this hill when we were kids, 'spraining' my ankle and those kinds of things.

When I got older, when I was a teenager, I started not being able to make as much, I wasn't as profitable. And as sick as that sounds, the more research you do, the more you find that that's fairly common. And I also started to get very lippy and very mouthy, very much this, eff you kind of an attitude because I was done. Every ounce of me that cared about the threats they were making, the drugs, the alcohol, the night life, the supposed 'freedoms' every ounce of me that cared about whether or not they followed through on any of the threats they made was suppressed. And I really just couldn't have given two craps more about whether of not anything else happened. And after a while it got to the point where I was very uncooperative, it sounds so weird to say those kinds of things but in terms of business, I wasn't profitable anymore. And basically said you know, you either need to let me go or you need to do whatever you're gonna do because I'm done, I can't keeping doing this anymore.

After a couple of weeks of silence I got the 'notification' to meet them downtown and they made a pretty significant threat to myself and my family, and then I never heard from them again after that. And it took my a pretty long time after that to realize that they were done, messing with me basically and that they weren't going to come back and come after me.

[what kind of person buys and rapes a six-year-old?]

Somebody who just, almost isn't human. I hate to say that because I know that they are human. But at the same time, somebody who's moral compass is so backwards that that's an okay thing to do, you know. Not even your everyday criminal does that kind of thing. People who think that they are entitled, that another person's body is something that they can sell and purchase. They believe they have a right to that. And I think that we as a culture have created a safe place for people to talk and think in that way.

Really, I think that there's two things that I really hope that people take away form hearing my story and hearing what I do now. First thing is that for any victims and survivors out there, there is a life beyond that and don't give up because we are fighting, we are fighting for them. And if you're out there and you want to reach out to use then we can get together and hopefully kind of help each other. I think that there's strength in numbers. And in this particular issue I think that the more of use that can band together and find support in each other through the community as well, but coming together as survivors as victims, being able to say this was my story, this is not who I am.