It is estimated that 425,500 people are enslaved in Thailand, with the many subjected to forced labour. Women overseas-workers most often find employment in private households or service sectors, finding themselves having to pay significant fees for the migration and recruitment process. Domestic servitude is also prevalent with the majority of enslaved being women from rural Thailand, Cambodia, Laos and Myanmar. Victims are often physically and sexually abused, confined to the house and find their pay and identity documents withheld.

Vatsana was offered a job in Thailand working in a factory. However, upon arrival she was taken to a private home and forced to work from 4am to 7pm every day. Vatsana experienced physical abuse daily and did not earn any money for her work. Finally, one day after over 16 years of enslavement, Vatsana was able to get a message over the fence and was rescued. 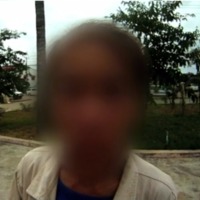 When I was a child my family was poor. My parents were farmers. The reason I went to Thailand, was because my family didn’t have enough to get by. I didn’t want to be a burden on my family.

I met a woman. I knew her through a friend of mine. I trusted my friend and I made a quick decision.

She persuaded me to work in Thailand near the Mekong River. She said I would work with her relatives. There was a factory. They needed people to work with them, for 3,000 baht per month. I believed her

I arrived at a two-story house. My room was near the dog’s room. It was a small room. I woke up at 4 or 5 in the morning. There was so much work to do I wouldn’t finish until 7pm. If I was slow she shouted at me. When she was not satisfied with my work she would slap me.  She would lock the door. She said if I went out the police would arrest me. I thought that if I obeyed her I’d have a chance to go back home. People rarely walked by because the house was at the end of the road, so I had no chance to ask for help.

At the end of the month I asked for my salary, but she said she bought me for 8,000 baht. More than 10 years passed and I still didn’t get any money.

I found a rock and tied it with a rubber band. When I got a chance and the owner was not at home, I threw it over the fence. The rock landed on the road.

When the rescue team arrived it was 5pm. She made me hide under the bed. They walked past the bed. I flicked on of them and they looked down. I felt really happy because I knew that I was going home.

I stayed at that house for over 16 years. I never got any pay.

To all the employers – if you want to hire, wither domestic or international workers, treat us like human beings. Pay us our money, it’s ours.