Vannak sought work away from home in order to provide for his family. He was offered a job by a taxi driver drying fish in Thailand and told that if he refused he would have to pay for the journey, money he did not have. Vannak was locked up and forced on to a fishing boat where he worked for 3 years under the constant threat of violence and never receiving any salary for his work. Eventually, Vannak escaped, swimming twenty minutes to shore and making his way back to Cambodia and his family. 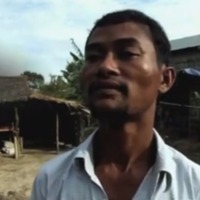 I decided to go and work far away from home, because my family was very poor. My wife was seven months pregnant and we had no money for the baby’s delivery. At that time, I decided to leave home to find a job at the border.

The motor bike taxi driver said, “There are no jobs except drying fish, if you don’t go, you’ll have to pay for this motorbike fare, and you’ll have to give the recruiter 400 baht.” At that time I didn’t have any money so I had no option but to go.

I was locked up when we arrived there by a few Thai guys, and they moved their fingers like this and said, “Bang! Bang!” So we didn’t dare to run away.

When I got onto the boat I was scared. A Thai killed a Lao many by cutting his throat, and dumping him into the water. Sometimes we worked 3 days and nights straight. If we took a rest we would be beaten. They kicked, hit and cursed at us. The owner beat me because I kept asking him to let me go home.

I never received any salary. I worked on the boat for over 3 years.

I escaped with a Thai worker. It took 20 minutes to swim away. When I reached land my goal was to go back to Cambodia. The only goal I had was to go back home.

I draw these because I want to illustrate what I experienced. I want to draw these so that my neighbours and those who have never been there will not be deceived like me.