Siti was 14 years old when her last remaining relative passed away and she needed to earn money. She was approached by a woman who told her she could get her factory work in Malaysia. However, upon arrival in Malaysia Siti was forced to work long hours in various homes doing domestic work. In the five years she was enslaved, Siti did not earn any money and was subjected to physical and sexual abuse. Following a tip off, Siti was finally rescued during a raid operation. 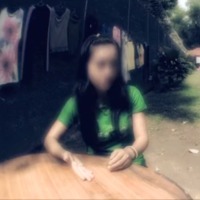 I left Indonesia because I wanted to gain life experience, and to earn money for the future.

I asked about the job, she said it’s factory work. I said I’d do it, but would I need to pay an agency fee? She said no, but my salary would be docked for five months. I believed her because she had an Indonesian relative who she’d also brought to Malaysia. I saw that she was successful and I was inspired. I wanted to be like her.

When I got to the agent’s house I was shocked. There were so many people. There were lots of people coming and going for work. There were 71 people who lived there. In one room there were 10, 20 or 30 people.

I was sad. I was really sad because I was tricked. The Indonesian and Malaysian agents tricked me. They said I’d work in a factory but when I got here I worked from house to house. I did everything from taking care of babies, old people… I had to bath and feed them.  If they urinated I had to change their diapers. If they were in pain I had to give them a massage.

I worked seven days from eight in the morning until eleven or twelve at night. The door would be locked so we couldn’t leave. I wanted to run away because I couldn’t take it anymore. After I was caught and returned home the agent scolded and slapped me.

(One night the agent lured Siti out of the house)

I asked where he was taking me. He said I was going to look after a baby. He gave me an orange drink. After I drank it, I felt sleepy. He told me to sleep in the car.

The next day, when I woke up I found myself naked. I didn’t have any clothes on and I was in pain. I don’t know who raped me because I was unconscious. I suspected that my employer had raped me but he denied it.

For the whole five years I was there I didn’t receive a cent. I feel I’ll never be able to forget what happened, because it was the darkest time of my life.

If I go back and tell people my story, I think my friends will treat me differently, they’ll think I’ve been tarnished so my reputation will be ruined.

My advice to people is to take care of themselves and not be too gullible. Don’t be deceived by smiles because behind many smiles are many lies.