Nadia Murad Basee Tah was one of thousands of people who have been enslaved by ISIS in Iraq. She is a member of the ethnic Kurdish minority Yazidi people. In August 2014, 10,000 Yazidis were killed or enslaved during the Sinjar Massacre in northern Iraq. ISIS seized control of Sinjar district, home to about 350,000 Yazidis. After killing the men, they took women and children into captivity. Along with all 1100 women and children from her village of Kocho, Nadia was captured. ISIS also killed six of her brothers, and her mother (who was too old for sexual enslavement). Nadia was taken with 150 other women and girls, ranging from nine to 28 years old, to Mosul. The women and girls were then distributed from centers. This system allows ISIS militants to take and use women and girls, then return us to the center. Like the other women and girls, Nadia was raped and tortured.

Nadia escaped to a refugee camp, remained there for a year, then immigrated to Germany through a visa program to treat and host women and girls who have escaped ISIS captivity. In December 2015, the Yazda organization helped her to speak before the UN Security Council. Since then, she had campaigned internationally to raise awareness about the Yazidi genocide and the plight of Yazidi women and girls. 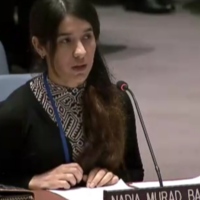 Mr. President, Ladies and gentlemen, Delegates of the Security Council, good afternoon. I would like to thank the United States for calling for this debate and for inviting me to speak. It is with great sadness, gratitude and hope that I stand before you today as one of the few survivors of one of the world’s oldest ethnic and religious groups now threatened by extinction.

I am here today to speak on the way the so-called Islamic State trafficked us, transformed the Yazidi women into Sex slaves, and the way IS committed a genocide against my people. I am here to tell what has happened to me and my community that lost hope is headed to the unknown, I am here also to speak on behalf of those who remain in captivity.

I am here to speak about a global terrorist organization that came to end our existence, culture and freedom, to speak about the nightmare that change life for a community overnight.

Before August 3, 2014, I was living with my family in Kocho village with my single mother and brothers and sisters, our village was beautiful, we were living in peace. But on August 3rd, the militants of the Islamic State attacked our areas and we found ourselves faced with a brutal genocide. These large groups of armed men of various nationalities in uniforms with weapons, had decided that the Yazidis were infidels and had to be eradicated.

The Islamic State didn’t come to kill the women and girls, but to use us as spoils of war, as objects to be sold with little or to be gifted for free.

Their cruelty was not merely opportunistic. The IS soldiers came with a pre-established policy to commit such crimes. Islamic State had one intention, the destroy the Yazidi identity by force, rape, recruitment of children, and destruction of holy sites they captured, especially against the Yazidi woman where the used rape as a mean of destruction for Yazidi women and girls and ensuring these women will never return to a normal life.

On August 15th, the Militants called us to the school building, where the separated men from us; I witnessed from the second floor of the school, they took the men and killed them, including six of my brothers and step brothers who were killed, and three who escaped the mass killing with Creator Blessing.

We, the women and the children, were driven away to another area. Along the way, they insulted us, they were forcefully touching women and girls.

I was taken with some other 150 girls to Mosul, in a building in Mosul, there were thousands of Yazidi women of children and who previously captured by ISIL to be offered as gifts. A militant approached me, he said they would take me, I was looking down, I was terrified, when I looked up, I saw a big man, he looked like a minister. I cried, I said I won’t want you, I told him you are too big for me, I am a little girl. Another militant walked in, I was still looking down, I saw his feet, he had small feet, I begged him to take me for himself, I was so scared from the big militant.

The one who took me asked me to convert, I did not, he then one day asked me for “marriage”, I told him I am sick, most of the captive women there had their menstrual period due to the fears. Then he one day forced me to dress for him and put make up, I did, and in that black night, he did it.

He forced me to serve his militant squad, he insulted me by forcing me to dress improperly. And I was unable to bear more rape and torture, I decided to escape, but I failed and I was captured by the guards.

That night, he beat me up, forced to undress, and put me in a room with six militants. They continued to commit crimes to my body until I became unconscious.

After three months of abduction, finally I was able to escape. Now I live in Germany. Thanks to Germany who accepted to treat me.

But it was not only me who suffered, it was a collective suffering, The Islamic State gave us two choices, covert or die, for those who accepted to convert fearing their lives, their men were killed, women were enslaved and children were recruited.

To date, 16 mass graves have been found, including a mass grave of 80 women who they didn’t desire, therefore decided to kill. More than 400,000 Yazidis are displaced, more than 40 percent of our areas remain under control of IS, and the liberated areas are not habitable because of the destruction and Yazidi fears to return and live in their homes with peace.

Over the past week only, more than 70 Yazidi women and children drowned on their way through dangerous paths to Europe, thousands are seeking and exit, a great percentage see immigration in the only choice.

Mrs. President, Ladies and gentlemen: The Islamic State have made the Yazidi women a fuel for human trafficking. I am presenting to you our requests and I have hope that humanity has not died, yet.

1. Bring back more than 3400 women and children currently suffering under the mercy of those who lost every bit of mercy.

2. Recognize the mass killing, enslavement and human trafficking committed as a genocide, I appeal to you to find a way to open a case before the International Criminal Court.

3. Liberate our land, liberate Kocho so that Kocho people can bury the remains of their dead, provide Yazidi Areas and other threaten minorities Areas with international protection so we can return one day and live in peace, I also request that you allocate an international fund to compensate victims and build our areas.

4. Open your borders for my community, we are victims of a genocide and we have the right to seek a safe place where our dignity will be preserved. We request that to give Yazidis and other threatened minorities the choice to resettle, especially to the victims of human trafficking, as Germany did.

5. Bring an end to ISIL, I have seen them, I have lived the pain they caused. We have to bring all human trafficker criminals and those who committed a genocide to justice so that the women and children in Nigeria, Syria, Somalia, and everywhere in the world can live in peace. These crimes against women and their freedom shall stop now.


Narrative as delivered to the UN Security Council at a session on Trafficking of Persons in Situations of Conflict, December 16, 2015, New York City.