Evelyn Chumbow was taken from her family in Cameroon at age 10 by a man who convinced her parents that she would get a better education in the United States. Instead, she was forced to work as a slave in the Maryland suburbs of Washington, doing manual labor for her captor and being verbally and physically abused.

In her narrative, which she delivered before the Senate Foreign Relations Committee, she asked Congress to address labor trafficking as well as sex trafficking, and referenced a House bill that addresses only sex trafficking. 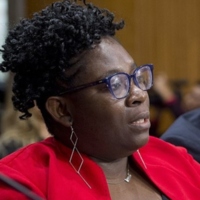 My name is Evelyn Chumbow. I am a survivor of human trafficking and an active anti-human trafficking advocate. I also serve on the United States Advisory Council on Human Trafficking, following my nomination by President Obama in 2015, where I advise the President’s Interagency Task Force to Monitor and Combat Trafficking in Persons (PITF).

I was trafficked from Cameroon to Silver Spring at age 10. My trafficker told my parents that I would receive a better education in the United States. However, instead of attending school, I was forced to cook, clean and care for the children of my captor. Every time I would ask to go to school, my trafficker said I couldn’t go because I was too stupid. I would go days and weeks at a time without eating. Sometimes I would have to stand throughout the whole night. Other times, my trafficker would beat me until she was too tired to continue. She would call me “fat”, “ugly”, and “dirty.” Too dirty that I wasn’t allowed to sleep on a bed and had to sleep on the floor.

At seventeen I discovered I had family living in the area and ran away to my aunt’s house. She also abused me and forced me to care for her daughter. Eventually, I ran away again and went to a local church, where the priest helped to put in contact with Catholic Charities. My trafficking was investigated, and criminal charges were brought against my trafficker. I was placed in foster care and became a ward of D.C. Foster care was a different, but also difficult challenge. I was happy to be in foster care, but the situation there was also dangerous. I was placed in a low income neighborhood, , and a lot of the other kids in the system were bad influences: drug dealers, prostitutes, gang members. I really wanted to get the education that was taken from me. I was too old to go to high school, but I went to a public charter school. I was happy for the opportunity to get an education, but hated school so much because the other students were gang members and drug dealers. But I refused to let that environment take over me. I got my Associates degree from the Community College of Baltimore County and just graduated from the University of Maryland University College with a BS in Homeland Security.

At age 21, I was no longer considered a ward of the state. I got a house in Maryland, but still faced many struggles. For example, even though I was a green card holder, I still didn’t have the documents necessary for many social services, including food stamps. There is no additional help available after you leave the foster care system. A lot of people are really interested in your story and getting you out of your situation, but after we are rescued, nobody cares what you do.

Survivors need more help once they escape their traffickers. We continue to suffer When I left my trafficker, I was talking to trees and still insisted on sleeping on the floor. I have physical scars that I carry with me, scars that I have to explain to my husband and young son. I also have many emotional scars. Survivors need psychological services. If I had the money to go to therapy, I would go. Accessing services is hard. Finding long-term care is hard. Our lives were taken away from us and we need help getting back into everyday life. Some of us are able to do it, but some are not able. It’s important for us to have long term care for the trauma that we’ve gone through.

I get calls everyday from girls who have been trafficked and need help. I don’t think that human trafficking should be only sex trafficking but all form of modern day slavery if not for me, but for the next person. As an advocate, I have seen how society and even politicians talk about human trafficking, but it is rare to hear about real solutions, informed by survivors, that can make long-term change. We focus so much attention to sex trafficking that we lose side of labor trafficking, we as foreign children that was brought in to the united state was ask to be brought here, we force into this country and to become slavers. I don’t see the different between sex and labor trafficking, there are people that are in labor trafficking that also being sexually exploited everyday by their trafficking. I want us to focus on ending modern day slavery instead of separating the issue.

There is a bill in Congress right now that just passed in the House called HR 4058: Preventing Sex Trafficking and Improving Opportunities for Youth in Foster Care Act that is dealing with the child welfare system – but it doesn’t include children like me, children trafficked for labor. It only includes children trafficked for sex. I will like to recommend long-term assistance for survivors of human trafficking including education and job opportunities. Additionally, foreign survivors should educate law enforcement officials on the cultural dynamics in relation to foreign victims of human trafficking. Language barriers create misunderstanding between foreign victims and law enforcement. Having survivor interpreters may help alleviate misunderstandings.

The key to prevention tools for modern day slavery is education. Many victims come from impoverished areas where there is little to no opportunity for advancement. People find themselves in these situations out of need and do not understand the potential implications of their decision to leave and go to another company. They have a skewed reality that a foreign country will offer more opportunity, however many find themselves enslaved. Additionally, those that have even escaped from their situation find themselves re-victimized due to lack of job opportunities.

With all that I have gone through, I am now a mother and wife, I just recently fulfilled my long term dream of getting degree, I am also working at one of the biggest law firm in the world and working helping survivors of trafficking to get a job.

Narrative as told to the US Senate Foreign Relations Committee, February 24, 2016, Washington DC.