Born in Bangladesh, Sabina was 12 years old when she was taken to a brothel in India. She was locked up and raped repeatedly until she managed to escape. Experts estimate millions of women and children are victims of sex trafficking in India. Traffickers use false promises of employment or arrange sham marriages in India or Gulf States and subject women and girls to sex trafficking. In addition to traditional red light districts, women and children increasingly endure sex trafficking in small hotels, vehicles, huts, and private residences. Traffickers increasingly use websites, mobile applications, and online money transfers to facilitate commercial sex. Children continue to be subjected to sex trafficking in religious pilgrimage centers and by foreign travelers in tourist destinations. Many women and girls, predominately from Nepal and Bangladesh, and from Europe, Central Asia, Africa, and Asia, including minority populations from Burma, are subjected to sex trafficking in India. 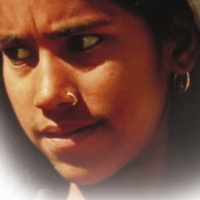 I’m the eldest child in the family. We're very poor because my father had two wives. There are eight of us altogether. None of us ever went to school. I stayed at home to help my mother. We went from house to house to do cleaning in exchange for food.

When I was 12 years old, an Indian lady used to come to visit us. We were really poor and she always told me, 'See, nobody can feed you here. If you come with me, I'd give you a better job. So come with me, but don't tell anyone.’ I didn't really know her but I was tempted by the idea of having a job.

One day, I told my parents that I'm just going out with this auntie and I'll be back very soon. I didn't take anything with me, I just left with her. I felt good that I was going to get a job but I was feeling a bit scared because I was going to a new place and I wouldn't know anyone. Also, I'm totally illiterate - I can't read or write - so I couldn't read anything to know where I was.

The lady sold me to a house. I tried to escape but the door was locked and there were no windows. They gave me food once a day, a bit of rice and dhal or chapatti. I was sick after seven days.

During those seven days, they tortured me two, three times a day. There were 10 to 15 men every day and they did all kinds of things to me. When I protested, they tied me with rope and beat me. I thought ‘I’m almost dead’. I wanted to die. I used to do all the housework at the house and sometimes I also worked outside, selling pots and pans. But at night, I had to do a lot of work that was really bad. I had to give company to the men who came at night.

Even now, the villagers still say bad things in front of me. They don't even bother to say it behind my back. All I hear every day is: ‘See, this is a bad woman, she went to India.’