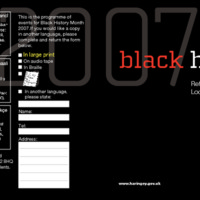 In consultation with the Black community in Haringey, the programme for Black History Month 2007 included many events to commemorate the bicentenary of the Abolition Act. Several took place at the Marcus Garvey Library in Tottenham, including poetry writing workshops, African drumming and dance workshops, and an exhibition and presentations led by Anti-Slavery International. There were several events to mark the bicentenary, including by Bedale House Supported Housing Scheme (featuring tenants' video diaries, a short film, poetry and guest speakers) and by Efiba Arts, supported by The Bridge New Deal for Communities. Haringey Council ran a poetry competition on the theme of slavery for young people aged 13-15. The winning entries were published in a pamphlet distributed to schools and libraries in the borough. Historian S. I. Martin led a guided tour of Haringey's places relating to the abolition of the slave trade. There was also a series of seminars by Robin Walker addressing 'Transatlantic Enslavement: What really happened?'. 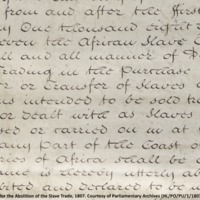