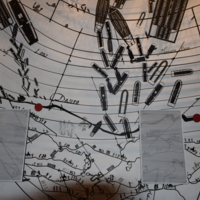 Freedom Park opened in 2006 having been established as a Legacy Project of South Africa’s second democratically-elected president, Thabo Mbeki. Nine sites were established as Legacy Projects, receiving ample state funding as spaces considered priority sites in preserving national history. Freedom Park was conceived as a national memorial, with a central feature being the 'Wall of Names'; a memorial wall displaying the names of people associated with eight ‘struggle’ epochs which the site considers to define South African history. Elsewhere, evidence of the influence of Mbeki’s ‘African renaissance’ philosophy is prominent. Memorial features in the ‘Isivivane’ area include a symbolic burial ground titled ‘Lesaka’, and ‘Lekgotla’, an African meeting place surrounding the trunk of a uMlahlankosi tree.

A museum, named //hapo (‘dream’ in Khoi) opened in 2013, introducing explicitly didactic content to Freedom Park for the first time. Much like the ‘Wall of Names’, this is grouped into eight ‘struggle’ epochs. It weaves an Africanist narrative beginning by positing the continent as the cradle of mankind, and ending by suggesting that Africans can look to the past to solve the problems of the present, many of which it links with European colonisation. Freedom Park operates a substantial educational and visitor tour programme.

Freedom Park is the only museum in South Africa outside the former slave trading epicentre which is now the Western Cape to cover slavery in any detail. Slavery features as an epoch on both the ‘Wall of Names’ and in //hapo. With the former, it is not clear whether the names displayed are actually those of people enslaved in South Africa, as some of the names are more indicative of transatlantic slave naming patterns. In //hapo, the epoch titled ‘Peopling’ details how Europeans viewed Africa as a market for human beings. A number of artefacts – some of which were created for the museum – depict African life prior to the arrival of Europeans, whilst an installation by the Johannesburg-based artist Clive van den Berg portrays departure. Slavery depicted in //hapo therefore is transatlantic slavery, rather than the very different system of slavery evident in South Africa.