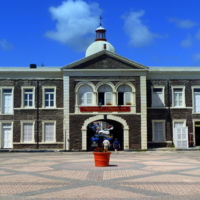 The National Museum of St Kitts

The National Museum of St Kitts is housed in the Old Treasury Building, built by the British colonial administration in 1894 and known as the 'gateway to Basseterre' due to its imposing size. The museum opened in 2002 and charts the history of St Kitts from its earliest, indigenous populations to its independence from colonial rule in 1983.

The museum has three permanent galleries which cover St Kitts' history in a chronological timeline making use of a small collection of artefacts, alongside images and text panels. The first gallery examines the indigenous populations of the island, alongside exhibits relating to natural history and ecology.

The second gallery explores the arrival of Europeans to the island and the development of slavery and the plantation economy. There are artefacts showcasing the brutal nature of enslavement, including an iron slave collar. It also explains the processes involved in the cultivation of sugar, as used on the plantations during the eighteenth and nineteenth centuries. It also provides a narrative of abolition and emancipation.

The final gallery examines the colonial governance of St Kitts post emancipation, through to independence from British rule in 1983.