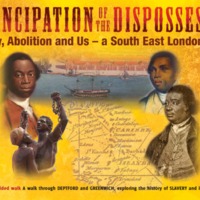 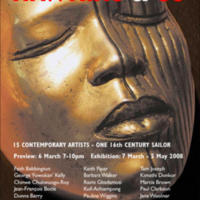 Curated by artist Kimathi Donkor, and first exhibited at London’s Elspeth Kyle Gallery, Hawkins & Co referred to the Elizabethan mariner Sir John Hawkins, whose 16th century voyages to Africa and the Caribbean pioneered the British slave trade. In 2008, an expanded version of the project, featuring over 70 artworks from 15 contemporary artists, was exhibited at Liverpool’s Contemporary Urban Centre. The display included artworks by Keith Piper, Barbara Walker and Raimi Gbadamosi, and a new commission from Jean-François Boclé. Each piece on show explored a different aspect of the culture and history of the transatlantic African-Caribbean diaspora affected by Hawkins’ legacy.

In 2017, a key work from the project - 'UK Diaspora' - was added to the permanent collections of the International Slavery Museum. 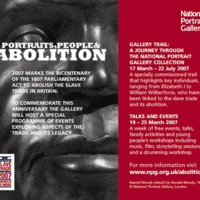 The National Portrait Gallery created a new gallery trail to mark the bicentenary, written by Dr Caroline Bressey. The trail highlighted portraits of key individuals, ranging from Elizabeth I to William Wilberforce, linked to the slave trade and its abolition. Portraits included those who invested in the trade, or who owned slaves and supported slavery, as well as images of enslaved people themselves and of people who were prominent in the movement to abolish the trade. The trail ended with a series of contemporary portraits of individuals involved in preventing slavery today. A week of talks, music, film and family activities included a discussion of the painting 'The Anti-Slavery Convention, 1840' by Benjamin Robert Haydon.