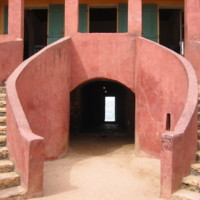 The museum is located on Gorée Island, 3 km off the coast of Senegal. The structure was built in 1776 as a holding centre for Africans waiting to be exported across the Atlantic. It was converted into a museum and memorial in 1962. According to the original curator of the museum, Boubacar Joseph Ndiaye, the island played a pivotal role in the containment and transportation of slaves to America during the transatlantic slave trade. The aim of the museum and memorial is to help its visitors come to terms with the extent of the transatlantic slave trade and the effects of the trade on Africa and its people. It was designated a UNESCO world heritage site in 1978.

The content of the museum includes murals and artwork showcasing traditional African techniques, and depicting the process of enslavement. There is also a variety of objects such as chains, manacles, and cages which emphasise the brutal nature of slavery. The site itself is accessed via a ferry and the tourism industry of nearby Dakar is linked closely with the island. The key voices addressed within the museum are those of the enslaved; the museum brings visitors into close approximation with the living conditions faced by the enslaved during the transatlantic slave trade. One of the most poignant features is the 'Door of No Return' which is said to be the point where enslaved Africans were boarded onto ships ahead of the Atlantic voyage.