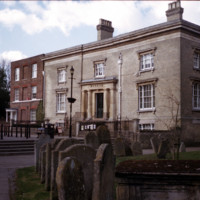 The Wisbech and Fenland Museum is one of the oldest, purpose-built museums in Britain. With its origins dating back to 1835, visitors are welcomed into a real ‘treasure house,' with collections housed in original nineteenth century cases. The museum is free to enter and focusses on local history, housing the vast and varied collection of the town’s literary and museum societies. Using these, the museum presents displays on a range of themes relating to key local industries, wildlife, archaeological finds and important people from the area.

One of these important people is Wisbech-born Thomas Clarkson, and it is through him that the theme of antislavery fills several of the largest cases in the main gallery. Using a combination of personal collections, archive material and objects linked to the wider slave trade (notably whips and a manacle), the museum follows Thomas Clarkson’s contribution to the abolition campaign, both in Britain and abroad. The museum also exhibits the narrative of Thomas’ brother John Clarkson who was instrumental in facilitating the movement of freed-slaves from Nova Scotia, Canada, to Sierra Leone.

This display was developed as a larger, standalone exhibition for the 2007 bicentenary entitled ‘A Giant with One Idea,’ but this was reduced following the end of the commemorations as funding was withdrawn.