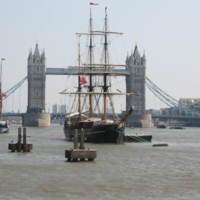 The Centre for Contemporary Ministry (CCM) is an educational charity specialising in the study of contemporary social issues. The CCM established a slavery exhibition at their base, Moggerhanger Park in Bedfordshire, once country home of members of the Thornton family, cousins of William Wilberforce. A mobile travelling display toured local venues. ‘Free at Last?’ was also part of the Spirit of Wilberforce project. This initiative saw a replica of the 18th century slave ship ‘Zong’ sail into London on 29 March 2007. The replica ship was accompanied up the River Thames by HMS Northumberland as part of the Royal Navy’s contributions to the bicentenary. The ‘Slavery Past and Present’ exhibition on board the replica was opened by the Mayor of London – a virtual reality display depicted conditions on a slave ship. The exhibition continued at the church All Hallows by the Tower, exploring the work of the abolitionists and the legacy of slavery. HMS Northumberland also opened to the public - an exhibition on board explored the role of the Royal Navy in enforcing the 1807 Act.