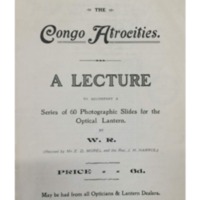 John H. Harris and E. D. Morel, The Congo Atrocities: A lecture to accompany a series of 60 photographic slides

The Congo Atrocity Lantern Lecture was devised by the British missionary couple Reverend John Harris and his wife Alice Seeeley Harris. Based on their time spent in the Congo Free state, it combined her atrocity photography with witness statements from a variety of sources. The lecture toured Britain and proved so popular that a standard set of lecture notes was developed so that the talk could be delivered by different speakers. The lecture icluded material designed to promote awareness of the brutal slave labour regime that occurred under King Leopold II. It also included material promoting British missionary activities in the area. The language and the accompanying slides were part of a discourse on the European 'civilising mission' and were used to justify the expansion of the colonial project as well as antislavery sentiment.