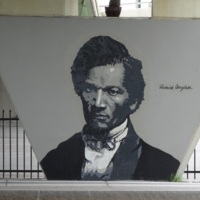 In 2014, Rochester's Shawn Dunwoody created a mural on the Interstate 490 bridge over West Main Street. It depicts the abolitionist Frederick Douglass, as well as Susan B. Anthony, Nathaniel Rochester and Austin Steward - all famous Rochester figures 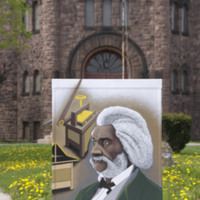 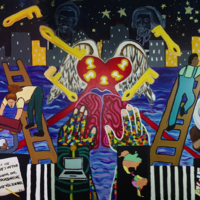 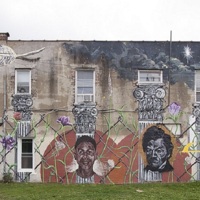 I Am, Yo Soy/Wall Therapy

As part of a Rochester WALL\THERAPY mural project in 2013, muralist Lunar New Year used Trayvon Martin, a young Frederick Douglass, and a local resident called Christopher to depict three possible paths of African American manhood in his mural I Am/Yo Soy. The young boy on the edge of the mural pleads to the North Star in the sky in a position that echoes Josiah Wedgwood’s famous 18th-century "Am I Not a Man and a Brother" medallion. An older version of Douglass then sits on the right side on the mural, as the only figure beyond the real and painted chain link fences.Lunar New Year, who is an Ecuadorian American Newark-based artist, explained that the mural is about “the history of institutionalized injustice in the USA… Injustice forged Frederick Douglass’s character, robbed Trayvon Martin of his life and [it] is up to us, to dictate what future awaits for young 7 year old Christopher from Rochester.”