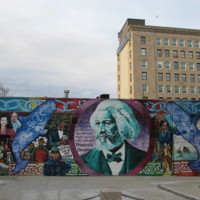 This mural in New Bedford titled Labor History Mural and painted by Irish muralist, Dan Devenny, is a short distance away from where Frederick Douglass first lived in freedom. It is on a wall near the Bristol County Probate Court.On September 18, 1838, Douglass settled here in New Bedford after escaping from slavery in Maryland, with the help of his soon-to-be wife, Anna Murray. It was in New Bedford where Douglass experienced, for the first time, what it was like to live as a free man. His abolitionist identity started to take shape. He read his first copy of The Liberator, became a licensed preacher, gave a speech in 1839 that denounced the proposal that free slaves be forced to emigrate back to Africa, and was hired as an agent by the Massachusetts Anti-Slavery Society (MASS). In 1841, after attending a regional convention for the followers of William Lloyd Garrison, Douglass felt compelled to speak about his time in bondage. Inspiring the Garrisonian audience, he was shortly recruited as a lecturer for MASS. “Many students in New Bedford never learn of the importance of Frederick Douglass and his relation to the civil rights movement and this city,” said Massachusetts Senator Mark Montigny. “This mural will be a constant reminder of his prominent leadership and what he means to New Bedford.”