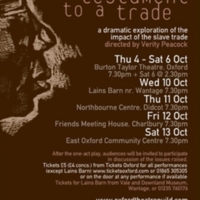 Testament to a Trade

Testament to a Trade was a play produced to mark the bicentenary, with close reference to Oxfordshire. Written by three local writers, the play was produced by Oxford Theatre Guild in collaboration with Oxfordshire Record Office and the Oxford Playhouse. Testament to a Trade weaves accounts of past and present slavery, and is situated in historical and contemporary contexts, notably 18th century Africa and Oxford, and contemporary Eastern Europe and Oxford. A number of archive materials relating to slavery and abolition are held by Oxfordshire Record Office, information on which inspired elements of the story. A teachers pack was produced to inform similar projects. The play opened at Burton Taylor Theatre in Oxford, and toured venues across Oxfordshire.