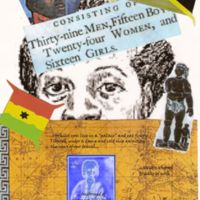 A collaborative project between Barnsley Archives and Local Studies, the Cooper Gallery and Cannon Hall exploring local connections to the slave trade. Cannon Hall is the ancestral home of the Spencer Family, who made their fortune in the local iron industry. In the mid-18th century, Benjamin Spencer became involved in the slave trade, and owned a slave ship called ‘Cannon Hall’; in contrast, Walter Spencer-Stanhope, who inherited the hall in 1775, supported the abolitionist movement. Pupils from local primary schools explored the hall’s connections to the slave trade and abolitionism, and produced artwork in response to the hidden histories, some of which were exhibited in the Cooper Gallery’s exhibition, ‘Witness’.