Barbara Amaya is an award winning author, advocate and survivor. From the age of 12 she was trafficked in Washington DC and New York for over a decade.

A sought-after speaker and advocate for trafficking victims and survivors of trauma everywhere, Barbara has shared her story on television and college campuses as well as with multiple civic, legal, faith and women’s organizations. Barbara is called upon by law makers and law enforcement to train others and to add her expert testimony to aid in the passing of human trafficking legislation in her home state of Virginia as well as other states. In 2014 Barbara was awarded the James B. Hunter Human Rights Award. She is the author of the book Nobody's Girl: A Memoir of Lost Innocence, Modern Day Slavery and Transformation (2015). 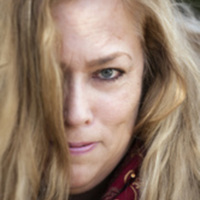 My name is Barbara Amaya and I am a survivor of trafficking.

I spent the first 12 years of my life in Northern Virginia. When I was only 10 years old, family members abused me. Before the abuse I was a pretty normal little girl: I loved to read, collect stamps, draw and I was a member of the Barbie fan club. Unfortunately, after I was abused, I became a different little girl. No one helped me or validated the abuse I had suffered, so part of me went into hiding and I became depressed. I didn’t want to be around anyone, no longer went to school, and eventually ran away when I was 12.

When I ran away, I was a walking target for traffickers and predators who look for damaged children: I had been abused, I was depressed and was in desperate need of help. It didn’t take long for traffickers to find me. Surprisingly it was a couple – a man and a woman – who found me on the streets of Washington D.C. They took me off of the streets where I was hungry and alone and brought me into their home where they fed me and seemed to care for me. That is, until they initiated me into the world of trafficking. They used me for a few months until they no longer needed me and then sold me to another trafficker. Right in our nation’s capitol, I was sold into trafficking to a man named Moses. Soon after buying me, Moses took me to New York City where he trafficked me for 8 years.

During my time on the streets of New York I was abused, shot, stabbed, raped, kidnapped, trafficked, beaten, addicted to drugs, jailed, and more all before I was 18 years old.

To ease my pain, I became addicted to drugs. This habit became very expensive and I was no longer a valuable commodity to my trafficker, so he released me into New York. It was terrible; I was addicted and alone in the city. Thankfully, at a methadone clinic where I had sought treatment, I met a woman named Anita who helped me to find my sister who had apparently been living in the nearby city of Philadelphia and that Christmas, she helped me reunite with my family.

After a very difficult time detoxing off of methadone I started to slowly get my life back. I lived in Washington State, Mississippi and eventually came back to Virginia where I got married and tried to have a baby. Soon after I starting trying to have a baby, I found out that because of all the trauma I had endured on the streets, I was infertile. Somehow, I think it was a miracle; I was able to have treatments and can happily say that I was able to have a daughter.

In all of that moving around and having my daughter, I kept my past a secret. No one knew about the years I had been trafficked or abused but me. Then one night, when my daughter was 15, she decided to run away. My past came rushing back to me and I was so afraid that the same things that happened to me would happen to my daughter. I couldn’t just sit around, so I spent the whole night making phone calls and looking for her. Thankfully, I found her the next morning and, shortly after, told her about my story. After that, she never ran away again and she is doing well today. I have a wonderful grandson and I live a content and quiet life.

I believe I am alive today because God watched over me all those nights on the streets. He kept a part of me untouched inside – despite all the men and all the trauma I endured – a part of me remained clean and whole. I call that part of me my soul.


Narrative as written for the Richmond Justice Initative.