Ker Deng, one of the Dinka people of Southern Sudan, was captured into slavery as a child during Sudan's civil war. His father had died and he was captured alongside his mother, Angel Mangok Diin, and taken to the North by raiders. He was blinded by his slave-holder, Zakaria Salih, as punishment for letting a goat escape. Unfit for work, he lived with a neighbour then in 2010 was handed to slave retrievers who return former slaves to the South. In 2011, a sponsor enabled him to resettle in the United States. His mother remains enslaved. 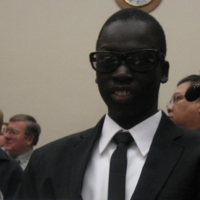 My name is Ker Deng, and from a time I can’t remember until very recently, I slept with cattle and goats. I ate the grain that was fed to horses.

I was treated worse than the animals I slept with.

Like them, I was property. I was a slave held in Northern Sudan.

The animals were fed every day. But I wasn’t.

To the man who owned me and my mother, the animals had worth. They were valuable. We weren’t.

My mother and I were captured when I was too little to remember.

My mother told me how it happened: Of the day Arab raiders from the north came to our village. They burned our huts. They killed the men. They stole the livestock. They tied the rest of us to camels and dragged us to a life of slavery in Northern Sudan.

Our slave masters were named Zacharia and Mariam. They gave me a name: “Cattle-Keeper.”

That’s why I had to sleep in the shed with the goats and the cattle. They’d tie my ankle to a goat, so I’d be awakened if they tried to get away.

At least I had a grass roof over my head. My mother had to sleep outdoors – in the garden – so she could keep animals away from the family’s crops.

Zacharia and Mariam had five children, some of them older than I was, some younger. When they went to school, I would go into the fields to pick red tea.

I was fed with the horses.

Once in a while, I was given watermelon or vegetables to eat. I remember being told, “This is your food for the next few days.”

When I was very small, I couldn’t control the goats. That’s usually why I was beaten, but not always.

Zacharia drank. And whenever he got angry, I got a beating.

My mother could do nothing to help me. She’d be locked up, and if she resisted in any way, she was beaten, too.

When he was drunk, Zacharia would call me an infidel and make me recite Muslim prayers. I still remember them. I want to forget them. I’d like to forget all of it, but I can’t.

The worst thing Zachariah did was to blind me.

He was dissatisfied with my work looking after goats and sorting red tea leaves. I was beaten and hung upside down from a tree. Zacharia rubbed chili peppers in my eyes and built a fire under me so the smoke would make the pain even worse.

I almost went crazy because the pain was so bad.

I was saved by a neighbor, an imam named Bakit. He felt sorry for me and cut me down from the tree. He took me to his home, and he let me stay there several years.

In the beginning, I could still see. Bakit even had me sort red tea leaves for him. But because of the peppers, my sight gradually got worse, and after a while, I became completely blind. First I lost sight in one eye and then in the other.

My mother always told me, “Do not forget who you are. You are Dinka man, born in the South, and your father still lives in the South. Don’t forget your language and who you are.”

As far as I know, my mother is still being held in Northern Sudan, and she’s only one among many. I often saw other Dinkas in the same situation we were in, but was never allowed to talk to them.

My mother never gave up hope. She used to say to me, “I know we are living in a bad situation, but maybe something will work itself out.”

I think of my mother every day, and what she is probably still going through. I pray to give her the strength to survive -- and to give you the courage and wisdom to find some way to gain her freedom.

And I bring you a message from them, and from me: I want to see my mother again, in freedom, along with all the others being held in slavery in Sudan.

You are powerful men and women. Please, find some way to help.

Thank you for your time and consideration.

Narrative as told to the Subcommittee on Africa, Global Health and Human Rights of the US House of Representatives Committee on Foreign Affairs, October 4, 2011