Kayti was trafficked at 11 in the United States. She had experienced sexual abuse at home since the age of two and later, her father took her to a house where she was subjected to child commercial sexual exploitation. Kayti’s exploitation continued until she was twenty-eight years old at which point, she reached out for help. 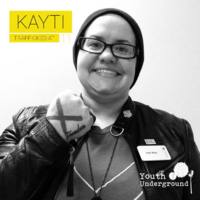 Kayti faced violence at the age of two, sexual abuse at six, and trafficking at 11—in the USA by her own father (for security reasons, we are not identifying the location or Kayti’s last name). “My dad took the abuse to another level at 11 years old…

One day he took me to an old house in a nearby city, where other girls and I were pretty much being rented out for sex. I was drugged, raped and beaten by a man I had never met, in a basement where there were several other girls and men. I was the youngest person there… Within a year, being raped, drugged, and beaten by different men became normal to me… My dad would chain me up to a pole in the basement, and let men have their way with me…

My dad was an ‘ordained minister’ who never actually preached anywhere, except for when he twisted the Bible to manipulate me. I believed I was a worthless, useless, stupid, human being, created only to be hurt…

On my 13th birthday, my dad and nine other men raped me, and after they were done, my dad burned me, made me take a shower, and then left me a birthday card that said, ‘Welcome to womanhood’. That night, I began self-injury.”

I finally told the pastor’s wife, at a church I went to… about the self-injury and the physical abuse… I was terrified of telling the whole truth. She looked at my arms and said, ‘God doesn’t love freaks’, and then told my parents I claimed they were abusing me. That just landed me a beating so bad, I’m surprised I survived.”

At 19, [my] dad took me to a small motel where a man drugged, raped, and beat me for four days and… locked me in a large dog cage. I think those four days messed me up more than anything else I had been through. At 20, I went to a battered women’s shelter… but my dad would still come and hurt me with his friends.

If you or someone you know have been through their own hell, even if it’s not the same, I want you to know that if God can do what he has done in me, that he can do anything for anyone. I want everyone to have hope that healing is possible. I am proof

Four years ago today [May 17, 2018], in the early hours of the morning, I started my healing journey. I was 28 years old and all I had really known was trauma, pain, and brokenness, with a few glimpses of light every once in a while. I had technically been rescued a month before, but after getting myself into a bad situation, I had to be rescued again. I called a number and talked to someone, who sent a rescue team of people I didn’t know, and I didn’t know if they would actually take me somewhere safe or if they would just sell me to someone else.

I was desperate enough to step out on faith. When I arrived at the safe house, I was terrified and couldn’t function because of all the trauma I had been through. I had been self-injuring for 15 years, didn’t sleep because of nightmares, didn’t really talk, and spent most of my time sitting in corners rocking because of flashbacks. Safety also scared me and I didn’t want anyone to ‘love’ me, but they did it anyway. I’m so grateful to God for giving me the courage to call that hotline, because if I hadn’t, I wouldn’t be alive.

Four years ago, I don’t think anyone would’ve thought I’d be where I am today. I know I was a handful for all the people that chose to love me and not give up. It’s because of God working through all of them, that I am who I am. I’ve gone through so much healing and restoration over the last four years, that it’s ridiculous!

After going through what I had, I should be dead or locked up in a state hospital, but God chose to let me not only survive, but to thrive, to the point that now I get to sow into others and spread hope. I’m celebrating my life today, by especially honoring the direct organizations, staff, and volunteers that all helped me in this journey, whether you were from the beginning, or just jumped in half way through, lol. This journey is a process and I’m thankful that I have all of you with me in it!

If you ever question whether you are making a difference or not in the lives you serve, look at me, and you’ll know the answer! Thank you, because of you, this miracle was made possible!