Kiir Uchan Majok was captured by Muslim’s and enslaved in Sudan, forced to work on a farm under the threat of constant violence. 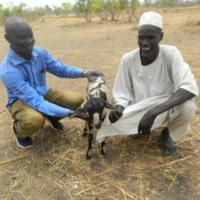 I was a cultivator on the master’s farm and worked as a firewood collector for the master’s wives’ cooking. My master has got four wives.

We were four in the farm but two of our colleagues were killed by the master when they decided one day to take rest in the shade on their own without permission from the master. He called them out of his farm and called one of his friends, they tied their hands and feet, blindfolded them and they slaughtered them by cutting their throat with a knife. Two of us were called there by master to witness the execution and he said have you seen? We said in panic, yes. If you do the same they did, you will have same punishment, go back to your work.