Adup Aguer Deng was captured in 1998 after being found hiding in a forest amidst fighting between the SPLA and Arabs. After being walked to northern Sudan she was forced to work on a farm and convert to Islam. Adup was finally freed in 2016. 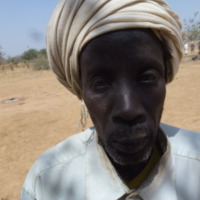 There was fighting in Nyimlel between Sudanese People Liberation Army (SPLA) and Arabs. I ran to Adhoutic village and hid in forest. Arabs found me hiding and they started beating me. One Arab stabbed me with a knife to my arm, another Arab cut my head with a hoe, then they tight me down with a rope. Many Dinka were caught and we were gathered in one place. 4 Dinka were suspected to be member of SPLA because the way the look. 3 of them were slaughtered in front of us and another one was burned to death. We all were sitting watching these bad things. We just put our head down, that’s all what we can do. We walked 6 days to North Sudan. Many Dinka cows were looted. In north Sudan I was given to Adam, Arab master. He has one wife, Fatima, she has 6 children, 4 girls and 2 boys. My job was to watch donkeys and worked in a farm. Anytime donkey lost I was beaten and called bad names: Jienge, slave, (Mafein), dirty and smell bad. I was forced to Muslim. When I Adam Musa came to the area with his men, I went to them and they took me to their camp and brought me back to South Sudan.