Dhan Deng Bol was abducted in 1998. She tells of her experience that ended in those captured being divided amongst their kidnappers and forced into domestic service. 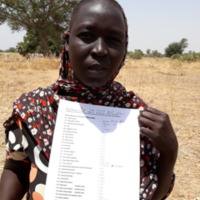 I was abducted in Gokmachar  in 1998, we were five in number, two men and three ladies, during the raid. I saw four people being killed on spot, they were shot dead when they refused to move along with the abducted group to the north Sudan.

We were immediately ordered by the raiders to help them drive the goats for them by arriving in the middle of the forest. When getting dark, we were all moved at gun point to make thorn fence for the goats and for our self and they slept around the fence to watch for the escapees. In the morning we continue, within the domestic fence  three people were killed in our group when they tried to escape at night,  two were slaughtered[ cut on throat] and one was shot dead after he managed to over jumped the fence.  Soon after we arrived in north Sudan, we divided among themselves, a master who don’t want too many people in his house has to sell some to those who need.