Kylee Gregg was trafficked in rural Ohio from the age of 10 until she was 14, beginning in 2010. She told her story at the age of 18, as a college student, during an interview with Francine Sporenda for the Révolution Féministe website. It was originally published in French and then in English by Nordic Model Now!, a UK secular, feminist, grassroots women’s group campaigning for the abolition of prostitution and related practices. Kylee identifies as a lesbian radical feminist and runs an activist organisation called Womyn Unleashed. 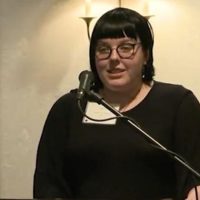 I was 10 years old when I was first trafficked. I met the criteria of an extremely vulnerable child, which is very common in trafficking victims. I had been molested years earlier in my life, and my dad and mother had recently divorced, which left me alone with my abusive mother. I was not safe at home with her and she often pushed out onto the streets of my small town. I was made to fend for myself at a very young age and this created an opening for traffickers to come into my life and exploit me. The main traffickers I dealt with were a family. They used their teenage sons to lure in girls. I was trafficked into a type of brothel prostitution. I was never on the street. The traffickers took me from house to house or apartment or car to sell me.

The johns were everyday men, they almost never looked like crazy men or stereotypical paedophiles. They worked normal jobs, they were perfectly normal. It still shocks me how well adjusted these men were – these men who paid to have sex with a child. They didn’t look like paedophiles, except when they were with me. When they entered the room, or wherever I was, they took off their masks and when they were finished raping me, they put that mask back on. They did not walk out as the paedophile rapists they were but as businessmen, janitors, fathers, churchgoers’ husbands, whoever they were by day.

The discourse that we are having in society now about sex work and prostitution is that it’s harmless, and pornography is a good thing. This is definitely propaganda made by people who traffic women and girls and sell them to men against their will. There is really no way to have prostitution legalized without having trafficking. I really want to stress that because I think there are lots of people who want to help trafficked girls but don’t realize that they are hurting them by being proponents of pornography and prostitution.

Later on, I was sold to men who were specifically seeking very young girls, but during that first year of trafficking, it was mainly customers for opportunity: they were going to rape whatever girl or woman they could get for the right price. I don’t remember any man turning away due to my age. Maybe it happened when I wasn’t there, when they exchanged money with the traffickers, but I don’t recall a man seeing me and turning away when he saw how young I was. On the contrary, I remember quite a few men being very excited when they discovered how young I was – I could only describe their face as pleasantly surprised. Once I even heard a man say to my traffickers, “She isn’t even that young!” I was probably 12 years old at the time.

I would definitely say that most, if not all, use pornography regularly, and that pornography is very connected to this kind of women hatred that it takes to buy women for sex.

I escaped trafficking when I left my mother’s house. My dad and I put together a plan for me to run away from my mother’s house and to live with him. He did not know about the trafficking or past sexual abuse at that time, he was only aware of my abuse at home. I was terrified to tell him because I was scared of being turned away again like I had been by other people. My mother had called me an “attention-seeking bitch” one of the times I had reached out for help from her. Victim blaming definitely created problems for me in escaping. Thankfully, when I ran away to live with my dad, I was able to escape trafficking.

I think traffickers evolve into it, but I am not sure. The family that trafficked me, they were not people I was related to, there were a different family. I saw that they were raising their sons to be involved in it. It appeared to me that the patriarch of the family, the grandfather, was the one who orchestrated the whole thing. I don’t know how he got involved in it, but he was raising his children and his children’s children to become traffickers and johns.

I would like to stress the normalcy of these very well adjusted men. We have these stereotypes about what a paedophile or what a rapist is supposed to look like – and it’s not at all accurate. These men are very ordinary – but they are heavy pornography users, and there is a clear link between pornography and their acts of raping.

I noticed also that these men push the stereotype of the “happy hooker” and the “sex worker.” They like to justify their behaviour by propagating the notion that prostitution and pornography are harmless. They recycle this propaganda made by traffickers. But these johns are ordinary people. They are also smart people: they know how to hide what they are doing. I would also like to stress again that this idea of “sex work” and supporting the sex industry as a good thing only hurts women and girls. It is pimp propaganda and we can’t stand for it.