Laurie was around 9 or 10 years old when she started working as a sex worker in Minneapolis. 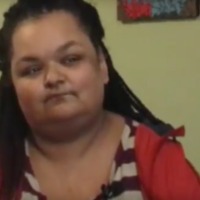 My childhood, I kind of felt like I didn’t matter. Um, when my brother molested me from the age of three ‘til five, and after I told my mom, my mom kind of went into a deep depression and my older brother tried his best to take care of me but when I was nine years old he went off to college and couldn’t take me with him. And so that’s kind of where I was left to fend for myself and figure out a way to survive. And my best friend’s older sister was in the life and it kind of seemed like it was normal, like it was the normal thing to do and so I went along with it. I was about nine or ten, in Minneapolis. I worked for my friend’s sister, she’s the one who initially showed me how to be in the life and she’s the one who introduced me into knowing how to be in the life.

[Interviewer: Do you remember your first trick?]

I was on the street. South Minneapolis. Lake Street, Bloomington, Chicago, Franklin. She was out there walking with me most days. She was there to collect the money.

[Interviewer: Were there other girls your age out there?]

[Interviewer: Did anyone ever bring up child protection?]

[Interviewer: Did you have sisters or brothers?]

I had those two brothers, but they are 7 and 9 years older than me.

[Interviewer: What were some of the survival strategies you had to use as a 10-year-old girl on the streets?]

[Interviewer: Did you have another pimp after the sister?]

I did. When I was… I’d have been probably 12, I met, um, I met a man and I want- I of course being 12 years old wanted someone to rescue me which is what, which is what it seemed like he was going to do, he said he was going to help me, which is not what happened, but being 12 years old I wanted to be rescued. And so I ended up moving in with this man and continued, of course I was continuing in the life because that’s how I met this man, being in the life. He sent me out. He would sit in the- he would sit in his car while I went and got in several different cars.

Narrative and image provided by FSPA