There are an estimated 157,000 people living in modern slavery in Cameroon. Child traffickers often use the promise of education or a better life in the city to convince rural parents to give their children over to an intermediary, who then exploits the children in sex trafficking or forced labour. Sometimes relatives subject children to sex trafficking within the country. In Cameroon, one in every three girls is married before the age of 18.

After Habiba’s father died, her mother struggled to support the family. At 14, she was forced into marriage with a stranger who would beat her and abandoned her after the birth of her twins, one of which died shortly after. 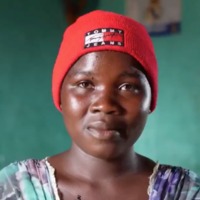 I didn’t want to get married. I wanted first to go to school. I got married at 14.

My mother asked me to come home to meet a stranger who was visiting saying it was an uncle when in fact it was the uncle of my husband. And when I arrived they locked the door behind me. They called the car to get me and they took me away by force into the car. I wanted to jump out of the car to get away, but there were men guarding me on either side and I couldn’t get out. That same day when we arrived I wanted to run away. Then in less than two weeks I managed to escape and come back home. But my mother said no, she said if I came back she would leave the house and disown me. That’s how I was forced to go.

I wanted to commit suicide.

I was 15 when I became pregnant. When I was in my seventh month of pregnancy, he beat me and my belly started aching. After a week I was still in pain so they took me to the hospital where I gave birth to premature twins.

I decided that a lot of people needed to hear my story because I feel so sad. First I go door to door asking them to come to my place. When they come I tell them my story. Like what my mother did to me. She became blind, there was no more money and she preferred that I get married. I also want to advise the mothers not to send their children off to marriage so early, even if they are struggling financially. Attending school is a good thing because these days we have equality of the sexes. A girl cannot just stay at home doing the housework while the husband goes to work. I want my daughter Anne Martha to go to school so she can have a good education. It’s for this reason that I’m committed to mobilizing young people, mothers and fathers so that children’s rights are respected

Narrative and image provided by UNICEF