There an estimated 131,000 people living in modern slavery in Malawi (GSI 2018). According to Girls Not Brides, one out of every two girls in Malawi will be married by her eighteenth birthday.

Nabena was forced into child marriage and as a result became pregnant at a very young age. She tells of her experience of pregnancy, childbirth and being forced to work long hours in heavy labour for little pay to support her child. 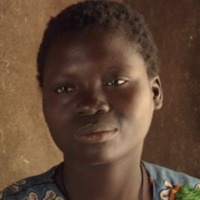 I became pregnant when I was very young. I felt pain in my heart because I knew that was the end of school for me.

When I became pregnant, I was destitute and struggling. My mother and father died, I was left alone and got into a relationship. I got pregnant when I was 13. My boyfriend left me. He said the baby wasn’t his. I was living a hard life, sometimes going without food and sometimes I would sleep outside because people would say “Go to the baby’s father’s house.” It didn’t feel right in my heart that I could be so young and give birth. When I thought of my pregnancy I was struck by fear. “Will I be able to give birth?” “Where does the baby come out?” I thought about my age and my body at the time.

When labour began my water broke. We went to the hospital. There were 16 people in the ward, they all gave birth and I was left alone. The doctor then said that I should have an operation. He said I was not old enough or big enough to give birth naturally. When I woke up in the morning I felt an immense pain. I stayed in hospital for six weeks.

My child is a year and three months old. My baby’s name is Masalina. My life is very hard. To find food I work in the fields and make bricks. For 50,000 bricks after eight weeks I get paid US $25. When I was at school I was a good kid. I used to like playing and did well in my classes. When I see my friends at school I feel pain in my heart. My whole being, my whole being years to go back to school.

Narrative and image provided by Girls Not Brides. Original video ‘The Child Within’ by Camfed.