There are an estimated 614,000 people living in modern slavery in Ethiopia. Girls from Ethiopia’s impoverished rural areas are exploited in domestic servitude and commercial sex within the country, while boys are subjected to forced labour in traditional weaving, construction, agriculture, and street vending. Addis Ababa’s central market is the site of numerous brothels, where some young girls are exploited in commercial sex. Ethiopian girls are exploited in domestic servitude and commercial sex in neighbouring African countries, particularly Djibouti and Sudan. According to a 2017 report by UNICEF, 40% of girls are married by the time they turn 18. They found that Ethiopia has the 15th highest prevalence rate of child marriage in the world and the fifth highest absolute number of child brides – 2,104,000.

Melka was forced to marry a man she did not know when she was 14 years old. Within the marriage she was subjected to physical violence. 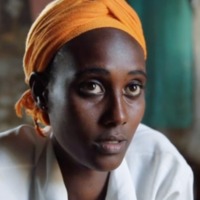 No one asks me to do this work. I do it because I have to and because, when I was growing up, everyone said it was unlucky to have a daughter. To be a girl. I didn’t believe that. I live in Libo Kemkem in the Northern part of Ethiopia. In my village girls have to work hard. We don’t have that much. But we still dream of becoming doctors and teachers. I’m doing this because I can’t let what happened to me happen to anyone else.

I was 14. I’d just come home from school and there were so many people at my house. Everyone was dressed up and I asked my mother what was going on, but no one would tell me. More and more people just kept coming.

Then my mother brought me a dress and said “Here. Put this on. You’re getting married.”

I tried to run but they beat me. Next to me was a man that I’d never seen before. I just wanted to get out of there.

After the wedding, they took me to his house in the next village. He was so old. He started pushing me towards the bedroom. I didn’t want to go inside but no one would listen to me. They just kept pushing. His friends beat me. It’s hard to remember, they just kept beating me until I went in.

I woke up in the hospital. My whole body was aching. I could barely open my eyes, I couldn’t even move. I was there for about 30 days. The nurses told the police what happened. My stepfather and the man they forced me to marry went to jail, my mother did too. The marriage was annuled.

After the hospital I went home, I didn’t have anywhere else to go. When my parents got out of jail my father wouldn’t even talk to me. I couldn’t afford to go back to school so I had to start working.

It was hard, but I’ve come out stronger. Before this happened, I was shy and couldn’t even look people in the eye. Now, I’m not scared of anything.

Here at the school, I teach girls about their rights. I do this so that other girls don’t have to go through what I went through.

I want them to know that it’s not unlucky to be a girl in Ethiopia.

Narrative and image provided by Girls Not Brides. Video originally from organisation 10x10.