There are an estimated 421,000 people living in modern slavery in Vietnam (GSI 2018). Many children from impoverished rural areas, and a rising number from middle class and urban settings, are subjected to sex trafficking. Girls from ethnic minority communities in the northwest highlands are increasingly subjected to forced services, including sex slavery and domestic servitude, by traffickers channeling their criminal activities through the traditional practice of bride kidnapping. Child sex tourists, reportedly from elsewhere in Asia, the United Kingdom and other countries in Europe, Australia, Canada, and the United States, exploit children in Vietnam.

12-year-old May, a member of the Hmong ethnic group from northern Vietnam’s mountainous Ha Giang province, was a victim of of ‘hai pu’ (literally “pull wife”) or bride kidnapping. Although illegal in Vietnam, bride kidnapping is regularly practised in Hmong communities. May’s new husband, Pao, the boy who kidnapped her, is also 12 years old and works across the border in China as a labourer. May did not know him before the kidnapping. 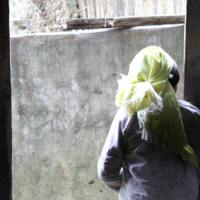 I was on my way home from school. Together with three men, this boy caught me and tied me up. They carried me to the boy’s house and locked me in a small room for three days. His parents brought alcohol and money to my brother’s house. My brother accepted the price and I became the boy’s wife.

If I don’t get married at this age, I can go to school and nurture my dream to be a teacher. However, if I become a teacher, no men in the village will want to marry me. They don’t like highly-educated women. They prefer the young ones who can work hard in the field. Now I’m married, I will live a life like other married girls in the village: taking care of the family, working on the field and giving birth.

I’m not happy, but because I am a girl, I cannot do anything to change this.

Some names in this story have been changed to protect identities.

Narrative and image provided by Girls Not Brides. Originally from Plan International.