There are an estimated 168,000 people living in modern slavery in Chad (GSI 2018). Chad is a source, transit, and destination country for children subjected to forced labor and sex trafficking. The country’s trafficking problem is primarily internal and frequently involves children being entrusted to relatives or intermediaries in return for promises of education, apprenticeship, goods, or money, and subsequently subjected to forced labor in domestic service or herding.

Geneviève was forced in to marriage at 9 years old. 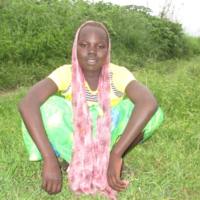 My name is Geneviève Vroumdam, I am 12 years old. Three years ago, I was forced into an early marriage.

My older sister was married to a friend of our father’s, an old man who neared his 70th birthday. She was only 15. One day, she just took off. She could no longer take this loveless marriage. She ran far away from us, from our village, and married a young man of her own choosing.

When a bride leaves, however, it is tradition for the family to return her dowry. And what a large dowry it was! My dad owed them seven cows. Of course, he could not afford such a sum, at least not right away.

The old man’s family refused to wait. Instead, they demanded I marry a boy who was only a few years older. Can you imagine? A 14-year-old boy and a 9-year-old girl building a home, starting a family? How could we at such a young age?

But my dad was indebted to them, so he said yes and I became a bride.

I will forever be grateful for World Vision’s help during this difficult time. They heard about my story and, determined to bring me back to my parents’ and send me to school, they spent five months talking, negotiating with the family until I finally returned home.

Now I can assure you, education is my biggest priority. Marriage can come later, when I am of age. Most importantly, I will marry a man I choose.

It is my hope that my story reaches other families and girls, so that it opens their eyes to the harms of early and forced marriage and encourages them to take a stand against the practice and for girls’ rights.

Narrative and image provided by Girls Not Brides. Originally from ‘World Vision Chad’.