There are an estimated 168,000 people living in modern slavery in Chad (GSI 2018). Chad is a source, transit, and destination country for children subjected to forced labor and sex trafficking. The country’s trafficking problem is primarily internal and frequently involves children being entrusted to relatives or intermediaries in return for promises of education, apprenticeship, goods, or money, and subsequently subjected to forced labor in domestic service or herding.

Boutaida was forced into marriage  at a young age after her mother left to marry another man. 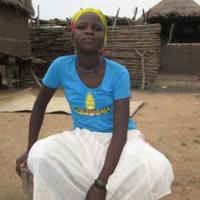 I come from Ba Ili, a small community in the southern part of Chad. My mother was the third of my dad’s wives and I, his first daughter.

My problems started when my mother left home to marry another man. My father suddenly saw me as a stranger. I was no longer his daughter but a good-for-nothing, and he would deprive me of the few pleasures and freedoms I had. I didn’t feel at home anymore and I quickly lost my appetite – not that there was much food to begin with.

In the midst of this personal, emotional and financial turmoil, a young man – I think he was 22 – stopped by the house one day. He introduced himself to my father and simply asked for my hand in marriage. Due to our financial difficulties and under the weight of tradition, my father did what most fathers in my village would have done: he said yes.

At first, and despite my young age, I was at peace with the marriage: I would be able to avoid my father and to find a home where maybe I would be “loved” and fed better. As things evolved, however, I started to see the arrangement under a different light.

It was on a Sunday afternoon, in the early days of March, as I was heading home from a nearby market, that my soon-to-be husband and his friends abducted me. Within two days, he sent my father two cows as an advance on my dowry; customs normally requires twelve cows from the groom’s family.

At this point, the news of my marriage had reached the child rights and protection network set up by World Vision Chad in Ba-Ili. They immediately reached out to my family, my husband’s family and the village’s traditional leaders.

Two long weeks later, after much discussion and with the support of our leaders, the two families came to an agreement; they now saw that marrying me at such a young age would only endanger my health and cause me pain and suffering. After a month of marital life, I returned to my father’s.

I don’t want to imagine the life I would have had or the hardships I would have faced if the child rights and protection network hadn’t intervened. I am forever grateful to them.

Despite what happened, I am not against marriage but I will only marry when I am old enough to do so. I encourage my sisters, friends and every girl to rally against child marriage.

Narrative and image provided by Girls Not Brides. Originally from ‘World Vision Chad’.