There are an estimated 47,000 people living in modern slavery in Guatemala (GSI 2018). According to the organisation Girls Not Brides, 30% of girls are married before the age of 18 in Guatemala.

Aracely was married to a 34 year old man when she was just 11 years old. 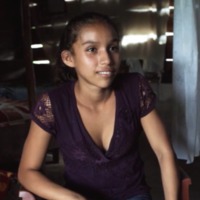 He told me he was 34 years old. I met him when he came over to his mother’s house which is close by. Then he came over to my house. I was 11 years old when I quit school, that’s when we got married. He left me when I was 4 months pregnant. He said the child wasn’t his.

When we went to a judge to get us married he paid him 500 quetzales. That’s when he was told he had to show my dad’s death certificate. After that we got married in a church. When I realised I was pregnant, I felt… I was distressed. We called him but he never answered and he never came. During the time I was pregnant he didn’t give me any money. He hasn’t even come to see the boy now that he’s a year old.

Well, what I hope is to keep moving forward, as they say, to see how I can get my boy ahead. It will be difficult once he grows up and decides to leave. That’s going to be hard for me. For now it is nice, because he is the one who will help me get ahead when he grows up.

Narrative and image provided by Girls Not Brides