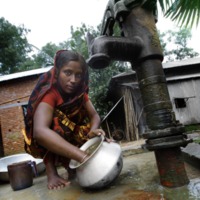 My name is Sadia and I was a child bride. I’m now 16 years old, and have lived all my life in a small village in Bangladesh.

I was married at 14. My husband, Sumon, is four years older. Together we have an eight-month-old daughter, Habiba.

My husband is a farmer. His family moved here a few years ago, and we live with the rest of his extended family. I didn’t know him before we were married, I had never seen him before.

I enjoyed school, especially maths, which was my favourite subject. But in 8th grade, I was suddenly told by my parents that I had to quit.

I only had two years left before I was due to finish – I did not want to leave school! I’d dreamed of becoming a teacher so that I could give others the opportunity to learn.

It was terrible for me to have to sit inside and watch my friends going to school. But I did not complain and did what my parents told me.

I think it was four or five days after I left school that my grandmother told me what really was going on. I was shocked and completely devastated. Marry? Me? But I said nothing to her.

I was very scared. I was nervous about what to expect – especially about my in-laws. How would I relate to them? What would they expect from me?

I didn’t meet my husband before the wedding, but they said he was a good man. He had a job and was not one of those men who just hang around and do nothing all day.

But knowing this about him did not really make it easier. All I thought about was the freedom that I would lose. Leading up to the wedding, I sat at home and did nothing but cry.

She also told me a little about what was going to happen on the wedding night.

Six days later I was married. During the ceremony, I washed, dressed and had mint leaves placed in my mouth. The others danced but I just stood there. I was given a bracelet and traditional nose ring.

When I was officially a married woman, I cried.

At the wedding, everyone was busy preparing all the food for the big party. It had to be good as it was served to the groom's family.

During the party, while the others ate, my husband and I were brought into the house for the official part of the wedding. We sat next to each other on the bed and we were fed with rice and milk.

This was the first time I saw him. I looked over at him and wondered if I would live up to his expectations.

We said nothing to each other. The first time we were alone together was the wedding night.

The first words he said to me were to tell me to stop crying.

I told my sister, who sat me down and told me about being pregnant and what that meant. I felt very sick; I was dizzy and threw up all the time. And I could not eat.

Grandma gave me money so I could go to the hospital. There, they said I was three and a half months pregnant.

I felt completely helpless. I was just a child! I knew nothing of the duties as a mother, how would I do this? What if I did not love my child enough?

I sought the advice of my sister several times during this period. It was difficult as my thoughts were swirling around.

I had a difficult pregnancy and was sick a lot with a lot of pain. The pain was absolutely terrible, and I spent a fortune on going to the doctor, although I was lucky to even be able to visit a doctor.

Towards the end of the pregnancy, the baby stopped moving. When I had not felt any signs of life in two days, my mother took me to the hospital. There, I got a bit of a shock.

It turned out that there was no amniotic fluid left. I was told that if I give birth at home now, neither I nor the child would survive. This was scary for me to hear. The reality was brutal.

I told my husband that both the baby and I could die. He was very worried. He said he would not lose us, so he took me to the hospital.

I told the doctor it was best if God took both of us.

Habiba was born by caesarean section at the hospital that day, and thank God, we both survived.

I have become accustomed to my new life. I have my duties as a wife and mother. But I worry a lot.

I worry about money, my husband, my child and my chores but most of all I worry that my own daughter will also one day be married off early.

As a mother, I hope that I can influence my daughter's life, so she should not have to experience what I had to go through.

I want to spread the message that child marriage must be stopped and tell people about the consequences for young brides. I might have died on the day I gave birth. No one deserves to go through what I experienced.

More fathers need to know this so they do not marry off their daughters early.

I dream that one day I can be a respected adult in local society. I hope we do not have to be poor anymore and that we can have a good life. But to complete school? That dream is long gone.