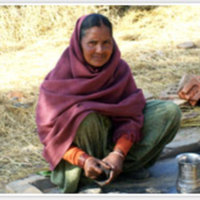 Even birds have nests, yet as a human I had no place to shelter my children from the sun, rains and shivering cold. At last I have got it I will fight to keep it!

“Sat Sri Akal.” I am Daljit Kaur born and brought up in a communist family. My father and his friends always used to discuss the revolution in Russia and China’s landless agriculture labourers and their struggle for freedom. They used to discuss the exploitation carried out by the rich landlords and the traders against the poor and landless and dream of a better future.

Like other young people, my husband became a “Siri” (a bonded labourer). He and I used to work tirelessly, only to see our debt growing day by day. We feared that, like others from our community, we may have to spend the whole life in debt bondage.

One day we learnt from an elder in our village, Baggicha Singh, of an organization which liberates bonded labourers. We approached Volunteers for Social Justice who assisted my husband liberate himself after spending several years in bondage.

However, like many other labourers in our village, we were landless and had no place to live. We all occupied vacant government land which was not used for any purpose and had divided this up into small plots of 125 square yards where we constructed our houses. The Panchayat (Local Self Government of village) later decided that they wanted to demolish our houses, an act which again would have left us homeless. With the help of the VSJ the demolition order was prevented and we were to get this land – home to thirty five families – regularized.

Now I have four children, two daughters and two sons who all are studying. With the help of VSJ we got election cards, ration cards and a MGNREGA job card. My husband has trained as a Stone Mason and now earns a sufficient amount to support the family.

I too work as a daily wager. After initially struggling to gain the benefits of the MGNREGA scheme, myself and other members of my community joined the NRGA workers union. I have been elected as President of my village unit and the scheme is operating better. I now feel it is the revolution which my father and his friends use to dream of.