It is estimated that an estimated 37,000 people are living in modern slavery in Japan (GSI 2018). The country is the destination for men, women and children trafficked for forced labour and commercial sexual exploitation. The majority of trafficking victims are foreign women who migrate willingly seeking work, but find themselves trapped in debt bondage, having to work in domestic and sex work to pay off fees incurred. Despite warning from the U.N., it is reported that human trafficking is on the rise in Japan.

International Children’s Care Advocate Esther Caukill shares her story of finding peace after being trafficked for sexual exploitation to Japan when she was 19. 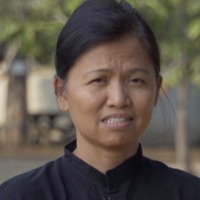 My name is Esther. When I was 19, I was trafficked. As a child I was brought up in a really very poor family, sometimes we go to bed hungry. My dad molested me and I was so scared I couldn’t tell anyone. I didn’t want to stain his reputation because he was a deacon in our church, and I thought how could this person be holy at church and then at home he was a monster? At a young age I told myself that I have to get educated and help and get out of poverty and help my siblings.

I applied to work as a singer in Japan, but on the day of our departure they gave me a fake passport and we were instructed that if we say something or tell anyone about their operation, they’re going to kill my family. When we reached to our destination, I was brought to the mafia boss and I was raped. I think they probably tried to ‘test the goods’ that they bought.

I was put in a karaoke club and we were forced to go out to the clients and because I didn’t want to, they would just slap me and kick me until I had to go with a client. And all I could do was cry every night and try to plan a way out.

Eventually we were able to escape, and I was hiding away from Yakuza, which was the Japanese mafia.

Years later, I was fortunate that I was able to come to Australia, I became an accountant and one day one of my clients, I used to go to their home office, I found that they were loving, kind and I found that they were Christian. And I asked if I could do some bible studies with them. Although I had done a lot of self-help before, I just kept going back to my way of thinking and feel of enslavement. It’s only with God I’ve found that inner peace and total freedom. I wish that you can find that too.