Dee was in and out of foster care as a child. At the age of 12 she was taken to a party where a man invited her back to his apartment. Once there, Dee was taken to a pimp named Red and subjected to commercial sexual exploitation. She was arrested for prostitution at 13 years old. Dee talks about the hardship of recovery and finding support after escaping the life and now works to support other survivors of sex trafficking. 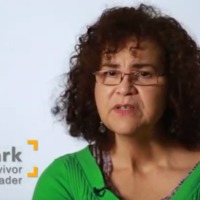 I was in and out of foster care. My mother kissed and hugged us and loved us, but she kicked and punched and spit on us too. My older brothers abused us, I don’t have as clear memory, but physically abused us yes, and they were just odd.

Not necessarily do these pimps and perpetrators kind of groom us, it’s like some of us are so harmed by our parents or our caregivers and how we grow up, that we’re just primed for it. We don’t know it, but it’s like we’re just the perfect target they don’t have to do anything, they say jump and we jump.

And we go to this party, it’s all grown-ups, its adults. I’m 12 years old. I end up flirting with this man called Sam. He invited me to go to his house to have breakfast. I said yes, I willingly left with him. I don’t know how long it took, five minutes, one hour, half hour, whatever, two seconds. He said take your clothes off and get in the bed, and I did it.

And he drags me down the hall and gives me to this guy named Red. So Red was a pimp and there’s so much behind just telling that much of it, but I’ll keep telling more. But that a kid can find themselves in that predicament, you know that’s not the average thing that can happen to a kid, but it’s really easy to happen to a kid. It was so easy.

I got arrested for prostitution at age 13 my mother had to come to the police station twice. And today I just think what was wrong with people? Why was someone walking me, why weren’t people saying this kid is thirteen years old and by the way this is what happened to her at 12, and by the way she’s been in and out of foster, you know? No one stopped to say something’s happened to this girl, this little girl, let’s help her, let’s figure it out. That never happens. So that was kind of, you know. Today I’m hopeful that that would not get overlooked.

I went through hell being pimped, but it was nothing like the hell I went through afterwards. And I think I’m a good mom. My kids are okay, they’re better than okay. But I think I would’ve been a fucking great mom if I didn’t have to live through hell. And they didn’t have to. So, maybe if someone paid attention and tried to help me and tried to build me up and push me off to have a better life, maybe I would have.

I’m in survivor mode. I’m engaging, I’m everything you think when I leave that we had a good session. I walk out the door, I already forgot what the hell we talked about, have no clue. I have a couple of memories of a couple of things. So whatever was supposed to happen there’s no follow through.

And the provider gets to think like I want to empower her, she can do it. Okay, I’m gonna give you the bus pass, you can do it, you can do this. And it still doesn’t happen. So that to me is that client needs someone to kind of take them through the motions, the ‘travel companion’. Take them and get it done and model it until she gets strong enough.

The more I text and call someone and the more, regardless of what I say to them, then they have opportunity to have a second, five seconds, a minute, however long we stay on the phone, of normalcy, of love, of kindness. Because usually still, women that have just come out of the life are still connected to all kinds of stuff. Pimps are good pleaders, they’re good beggars, they know how to beg, they’re really good at it. But even women who are out of the life, they might still know other women that are still in the life. So their conversation still is one up on the other women. So bitch, this bitch, it’s still negative, it’s not a healthy conversation. Somehow someone’s dissing them or not seeing them for something decent ‘cause that’s what’s going on, and then they get that one text of ‘hey what’s up girl, I was just thinking about you, what you doin’?’