The UN has estimated that the number of refugees, asylum seekers and internally displaced people around the world has topped 65 million. Many of these people live in refugee camps across the globe. In Myanmar (Burma), thousands of people have fled civil war and found themselves confined to refugee camps in Thailand where they are vulnerable to human trafficking. In an attempt to provide for their families, refugees are lured for employment in Thailand and Malaysia then sold to employers as forced labourers.

Saw Pol Lu fled Myanmar (Burma) to escape the civil wars and now lives in Mae La refugee camp along the Thai boarder. Here the widespread corruption and failed Thai policy led Saw Pol Lu, along with thousands of other refugees, in to the hands of human traffickers. Saw Pol Lu tells of the conditions and dangers faced by Burmese refugees in Thailand. 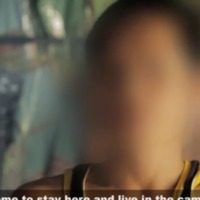 The first time I went we walked for about two hours. Then we went by car, it was a police car. It was a small car that would usually seat only three or four people, but we had to get seven our eight in it. We had to hide and we couldn’t breathe, that was the biggest problem. But if you want to work you just have to put up with the hardships and go.

When we come to stay here and live in the camp we are not allowed to travel outside. In terms of survival, yes, we are able to exist there, and we are given rations, but it is not enough. So we need to find a way to get more food. Put simply, we do the jobs that Thai people don’t want to do. If Thai people don’t want to do it then the Thai boss will hire Burmese people.

On the way there we were all in a van and there were two policemen who went ahead on a motorbike.  There was one more who stayed with us, he spoke into his radio to keep in touch with the others the whole way. The first place I worked was a clothing factory. We worked from six in the morning until nine at night. We were not allowed outside and we each had to pay the police 500 baht every month. We had to buy all our food there. The owner sold it to us. By the end of the month, after we took out the cost of food and the money for the police, there was almost nothing left.

This is what we have to face. On the boats, if you are sold to a boat you have to consider yourself a dead man already. And for the women who are sold they will be imprisoned in a home compound. The boss will lock them in all the time. Some are not even allowed to make telephone calls. Some bosses abuse them. Some bosses beat them. Some will yell, and some will beat you. There’s one girl who is back in the camp now her boss beat her until the top of her skull came off. She had it covered by a steel plate. Now she wraps her head in a scarf all the time.

Yes my sister disappeared. It started when we took her to a Thai lady’s place who found her the job and took her to the boss. Later that year my older brother went to visit her. He was going to her boss’s home but they wouldn’t let him, so they took my sister to the Thai lady’s house and let them meet there. Within a year they wouldn’t let us meet anymore but we could still keep in touch by phone. My brother would call and talk to her. But now, for the last four years we haven’t been able to contact her. We don’t know who to call. We’ve looked, asked people, and searched for her but we haven’t heard a thing.

The one thing that I want is a place where I can be free. I just want freedom, freedom to work for a living, and to travel. It would be wonderful to have these things.