Within Myanmar, some military personnel, civilian brokers, border guard officials and ethnic armed group continue to recruit or use child solders. In some cases, recruiters use deception, offering incentives or coercing children or their families through false promises about working conditions, salary, and promotion opportunities. While Human Rights Watch have noted that there is no way to precisely estimate the number of children in Burma's army, and while there is an ongoing process to end the forced recruitment of underaged children, there remain numerous accounts proving that the use of child soldiers continues among the 500,000 troops in the country.

Aung Ko Htway was abducted when he was a teenager and forced to serve in the Myanmar army for nearly 10 years. 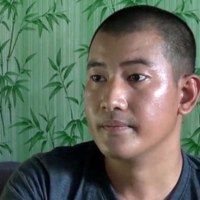 Although this sergeant was asked by a major to take me back home, he took me instead to a military market in Mingaladon and sold me for 100,000 kyats (U.S. $72) to another soldier.

We were treated like animals, trapped in an army hall. There were about 100 boys in a 50-by-50-foot room with no bathroom. If we needed to leave the hall to use the bathroom, we’d have to go out without any clothes because they were worried that we’d run away.

The army camps are worse than jails, I was entrapped and saw no one, including any family members.

I was able to go to a school for soldiers, but we were not taught. We couldn’t study. We had to work on corn and sugarcane farms. When we got back from the farms, there was no food left for us, so we ran away.

I told the investigator we didn’t kill him, but we were not freed. We were in a prison cell for seven months with shackles on our hands and feet and fed rice mixed with sand.

I met a soldier named Tun Tun when I was in jail. Once, while we were on duty as patrol guards, he said that he would take the gun he had and [escape] to go underground into a jungle. He received a death sentence just because of these words. He is still in Mandalay’s Obo Prison.