Within Burma, some military personnel, civilian brokers, border guard officials and ethnic armed group continue to recruit or use child solders. In some cases, recruiters use deception, offering incentives or coercing children or their families through false promises about working conditions, salary, and promotion opportunities. While Human Rights Watch have noted that there is no way to precisely estimate the number of children in Burma's army, and while there is an ongoing process to end the forced recruitment of underaged children, there remain numerous accounts proving that the use of child soldiers continues among the 500,000 troops in the country.

Saw Htoo, 16 years old, was forced to join the Dkba army as a child soldier. Not wanting to fight against his own people, Saw Htoo defected and is now in the care of the Karen National Union. 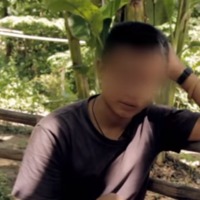 When I lived in my village, they forced me to join the army. I could not refuse, I had to join. There were many different people joining as soldiers and you did not know why they all joined. There were some who wanted to come, some whose parents told them to come and some whose parents asked them to come. As for me, I did not want to work with the Burmese SPDC. I deeply wanted to work for the Karen people, so I came here.