Within Burma, some military personnel, civilian brokers, border guard officials and ethnic armed group continue to recruit or use child solders. In some cases, recruiters use deception, offering incentives or coercing children or their families through false promises about working conditions, salary, and promotion opportunities. While Human Rights Watch have noted that there is no way to precisely estimate the number of children in Burma's army, and while there is an ongoing process to end the forced recruitment of underaged children, there remain numerous accounts proving that the use of child soldiers continues among the 500,000 troops in the country.

Moe, 19 years old, was arrested by soldiers at his home in Burma and forced to fight for them under the threat of death. Moe was only able to escape when he and his friend Si Thus killed the major and fled, running for ten days to Thailand. 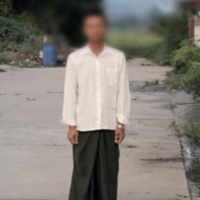 The last time I saw my family was at New Year Festival. It was at 8pm and we went to the tea shop. We came back home at 11pm. At that time there was no light on in the streets. Four soldiers wearing ordinary clothes arrested us.

At first we said we would not enter the army and we wouldn’t go to prison. We had just come back from the tea shop. We didn’t steal anything or do anything wrong. The soldiers said we will give you two days to think. After two days if you have not made a decision, we will kill you.

When the major, Si Thu and I went to the toilet we killed the major. We took all his weapons and dropped his body into a deep ravine. For ten days we fled, for eight days we starved. We got malaria but we did not die. We went through mine fields, but we were still alive. When we arrived here [Mae Sot, Thailand] Si Thu was killed by Burmese military intelligence and his eyes were taken out. I was lucky arriving here.

My wish is to know why, in Burma, with such young children as us, just 13, 14, 15 years of age, why is this happening to us? I believe there will be many more child soldiers just like me. What can I do so that these things will not happen to them?