Forced child labour remains a source of concern in Nigeria, according the International Labor Organization, the number of children working under the age of 14 in Nigeria is estimated at 15 million. These jobs include street vending, begging, car washing and shoe shining, while a large number of children work as domestic servants and farm hands. According to UNICEF, causes of child labour include widespread poverty, rapid urbanisation, breakdown in extended family affiliations, high school drop out rates and lack of enforcement of legal instruments meant to protect children.

Esther was trafficked to Nigeria at 13 years old after her sister told her they were going on holiday. When she didn’t return, Plan Togo alerted the police to her disappearance and she was eventually rescued and returned home. Esther is now pursuing her dream of becoming a midwife. 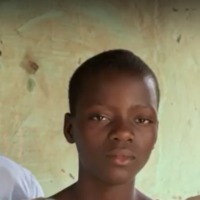 My sister told me we were going on holiday. She took me to a woman’s house. I washed the clothes, the plates and looked after her baby. Madame didn’t let me go out

Madame hit me because I didn’t wash the plates or the clothes well. I was scared of her. At night I dreamed of going home.

I wanted to leave but my sister told me I had to stay. I told her I wanted to go home and go back to school but she refused.

Someone came to Madame’s house and told her they were going to take me away. I was so happy to come home. I was sent back to school.