Forced child labour remains a source of concern in Nigeria, according the International Labor Organization, the number of children working under the age of 14 in Nigeria is estimated at 15 million. These jobs include street vending, begging, car washing and shoe shining, while a large number of children work as domestic servants and farm hands. According to UNICEF, causes of child labour include widespread poverty, rapid urbanisation, breakdown in extended family affiliations, high school drop out rates and lack of enforcement of legal instruments meant to protect children.

Dede was trafficked to Abuja, the Nigerian capital when she was 13 years old. Forced to sell petrol under the threat of physical danger. Dede was able to leave her situation, however remains in the capital working as a porter girl. 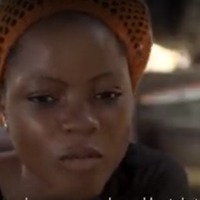 I sold petrol. We went to the bush to steal petrol from the pipelines. It was very dangerous, people would get shot and killed. I didn’t want to do it but she forced me.

I left home with the idea that I was going to sell things. I refused to sell petrol but she still stopped me going home.

I’d tell other girls not to go to Nigeria. If they don’t listen to me and still go, it’s their choice.