Barbara Amaya ran away from an abusive home in North Virginia at 12 years old. By the age of 16 in 1972 she had been sent to three detention centres and lived on the streets of Washington DC and New York City. She spent over 10 years as a victim of commercial sexual exploitation where she was forced to work as a prostitute and hooked on heroin. Today Barbara works to bring awareness of the adversity that survivors of violence and trauma have overcome and trains law enforcement, health care professionals, teachers and counsellors how to interact with victims. 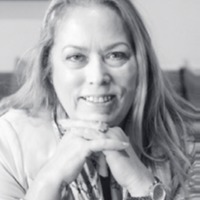 Looking back on how very young I was, I’m always amazed when I see young children today. I didn’t have a clear plan, as much as I was running away from circumstances, looking back now I was looking for something too. I think that every child needs the same thing, they need love, family, a roof over their head, food. I was looking for a lot of those things and running away from some things as well.

A question I get a lot is why didn’t you just leave? Why don’t they just leave? I always try to make people understand Trauma Bonding and Stockholm Syndrome (occurs as the result of ongoing cycles of abuse in which the intermittent reinforcement of reward and punishment creates powerful emotional bonds that are resistant to change). Traffickers target vulnerable people, they don’t care who it is, if you are vulnerable, their job is to target you, whether it is a 12 year old runaway or a 35 year old man just starving, whose family is starving and he is trying to find. I was a perfect walking target, I was very vulnerable.

I didn’t have a rescue group or anything like that, I was alone. My trafficker had actually been arrested and sent to prison and I didn’t even know.  By that point, at age 22, I was heavily addicted to heroin. I actually pulled myself into a drug clinic and a member of staff went above and beyond to intake me and for whatever reason she took an interest in me. She started talking to me and she talked to me like a human being. She looked me in my eyes and for the first time in years somebody treated me like I mattered – like I was a real human being.

I had an epiphany – this grand moment in 2012. I know it sounds very dramatic and over-dramatised, but I was sitting in my living room, the TV was on in the background, I wasn’t really watching it.  At that point my life, I was in a dark depression, I wasn’t talking to anyone, I was isolating myself, never told anyone all those years. I’m also a cancer survivor and the cancer that I had is directly related to the fact that I was trafficked. I had uterine cancer. It was related to HPV, (HPV is the most common sexually transmitted infection – there are many different types of HPV, some types can cause health problems including genital warts and cancers) I know for a fact the reason I had it so severe according to the doctor, was because of the fact that I was a survivor and a victim of human trafficking

I had recovered from cancer, I was very depressed and I heard the news come on and I heard them talking about human trafficking and I had never heard that term before in my life. I had heard drug trafficking, but I hadn’t heard human trafficking. They were mentioning that they had a really large case of human trafficking, victims had been rescued not too far from my home and then they started talking about the recruitment techniques that these gang members use to recruit young women and young girls. That is when I had the great epiphany and I realised for the first time in my life. I was angry that it was still happening and I had this idea that I wanted to do something. Within a couple of weeks, I was sharing my story on the same news channel.  Then I just started doing whatever I could do to make a difference, that’s all.

In the US and the western world, people don’t think that it’s happening. Quite frequently when I speak, people will come up to me afterwards and they will say, they didn’t know it was happening here. I also have people that will come up to me and share some trauma of their own because I guess they feel empowered after someone else has shared their story. I have a phobia about public speaking; I’m not a public speaker. However, I recently had someone tell me, you can’t say that anymore because you’ve been doing it for a long time now and you are good. I really still feel like that when I go to speak, it’s horrible. Even in my TED talk I was shaking.

First of all if there are any victims of human trafficking present I want them to know that it wasn’t their idea or their fault, like I thought for so many years. I want other people who think ‘why are you talking about human trafficking, it really doesn’t affect me at all,’ to know that whilst you might think that – it does affect you. It affects you in many many ways. If you are a tax payer and you are working, it affects you as all those victims that are having medical services and social services and all those type of services – you are paying for that. If it doesn’t affect you morally, it is affecting your pocket, so you should care about it one way or another.

If you have children you should be very scared because today traffickers can be right in your living room, on your television, on your computer, iPhone or iPad. It happens in streets, at school, wherever there are people, there are traffickers waiting. I just want people to know that it is happening here and they should care because it is not a victim-less crime. It is far from a victim-less crime, it is a very violent crime.

We as a society have to change all these beliefs and viewpoints and view each other as human beings. It is about supply and demand and about vulnerability. Traffickers wouldn’t have a business if there wasn’t a demand for it. I was arrested so many times whilst I was being trafficked and I was labelled as a criminal even though I was the victim.