Jeri Williams left an abusive marriage and moved to Portland where she thought he would have a better life. However, she was jumped by a gang and forced to work on the streets as a prostitute. Jeri was finally able to escape with the help of West Women’s Shelter and talks about the help she received from fellow survivors. 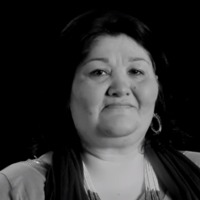 My first husband was incredibly violent. I left him and I moved to Portland. A young lady moved in with me to babysit my kids. Her brother was in a gang. I got jumped into the gang by being raped by all of them, and so then I was forced out onto the streets from 8 o’clock at night till 5 in the morning, 7 days a week. I felt like there was no way I could get out. I had to have engagements with 15 people a night before I could come home. I got into the West Women’s Shelter in northwest Portland. They worked with me. I had a psychiatrist. I had a caseworker. I had a counsellor. And I got sent to this organization. It was run by survivors who were also the counsellors. It was people saying that, "I see you and I care," because when you’re out on the streets, people look right through you like you’re invisible. And that was the thing I think that turned things around for me most.